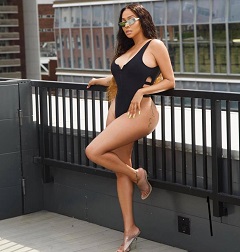 All She Does Is WIN! Lala Anthony Joins Cast Of Fox Series Reboot ‘BH90210’ According to Deadline, “BH90210 is described as a serialized drama – with a dose of irreverence — inspired by the real lives and relationships of Jason Priestley, Shannen Doherty, Jennie Garth, Ian Ziering, Gabrielle Carteris, Brian Austin Green and Tori Spelling“. Having gone their separate ways since the original series ended 19 years ago, the septet — who will play heightened versions of themselves — reunite when one of them suggests it’s time to get a Beverly Hills, 90210 reboot up and running.

Anthony will portray Green’s wife, Shay, a superstar hip-hop/pop artist. She is breadwinner of the family while her Mr. Mom husband watches over their three kids. Shay has become used to being the center of attention, but can still be surprisingly down to earth.

Per the series’ premise of drawing inspiration from original Beverly Hills, 90210 stars’ real lives and relationships, Green is married to Hollywood star Megan Fox, with whom he has three sons.

In the Beverly Hills, 90210 finale Green’s character David married Spelling’s Donna though in the CW’s followup series 90210, Donna revealed that she and David had separated shortly after the birth of her daughter.

In related Lala news, we recently reportrd that she and 50 Cent aka Curtis Jackson are joining forces once again for a new drama series at Starz. The premium cable network has put in development Intercepted, a soapy drama from 50 Cent and his G-Unit Films and Television, with Anthony attached to star and executive produce (see it here).