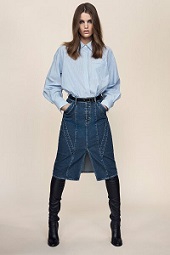 CHINA — DM Fashion Book recently reported that Jason Wu is considering a deal with a Chinese backer (see it here).

Private equity fund Green Harbor Investment revealed on its WeChat account that it has acquired a controlling stake in JWU, the designer brand’s parent company, for an undisclosed sum.

Founded in 2015 by Zidi Liu, a Duke University graduate, the Shenzhen-based Green Harbor, with offices in Hong Kong and Beijing primarily invests in health care, education, consumer and financial services industry. Wu will be its first investment in fashion and in an American company. Liu previously worked at Deutsche Bank, PPStream Inc. and Yunfeng Capital.

Wu launched his brand in 2007 and achieved worldwide fame when Michelle Obama wore his design at the inaugural balls on the night of President Obama’s first-term inauguration.

The designer has been eyeing China investment for a while. Zhejiang Semir Garment Co., one of China’s largest fast-fashion company, acquired an 11 percent in the company last year with $5 million, setting JWU’s market value at $45 million. It’s said that Green Harbor is taking over from American investment firm InterLuxe, which has owned the brand since 2014 and is exiting the company via this deal.

“This cross-border acquisition of Jason Wu is fully in line with our investment strategy at Green Harbor Investment,” the company said. “As the Jason Wu business expands into the Chinese market, having Green Harbor as a partner, Jason Wu not only will be able to rely on our rich management experience at the operational level, helping Jason Wu reshape the management team, optimize the incentive system, and strengthen marketing and sales team, we can also allocate strategic resources such as media, talent, real estate and finance to help the company further develop in China.”