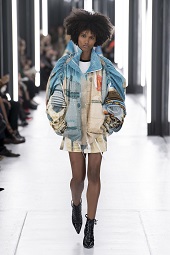 Nicolas Ghesquière, artistic director of the house’s women’s collections, announced that the show will take place May 8 and will be held in the TWA Flight Center at New York City’s John F. Kennedy International Airport.

The terminal, which opened in 1962, was designed for TWA by Finnish-American architect Eero Saarinen.

Known for its wing-shaped roof and tube-shaped corridors, the mid-century modern building has been closed since 2001. It will be revived soon as the centerpiece of the TWA Hotel, set to open on May 15, housing retail, eight bars and six restaurants, including the Paris Café by Jean-Georges Vongerichten.

The TWA Flight Center was declared a New York City landmark in 1994 and went on the National Register of Historic Places in 2005. It was also used as a backdrop in Steven Spielberg’s “Catch Me If You Can” starring Leonardo DiCaprio and Tom Hanks.

Louis Vuitton will be the first to stage an event in the restored building before it opens to the public.

“The TWA Flight Center, a sheer evocation of travel itself, is inherently linked to Louis Vuitton’s commitment to exclusive architectural discoveries, to its art of travel, and represents an ideal close to Nicolas Ghesquière’s inspirations,” the brand said in a statement.