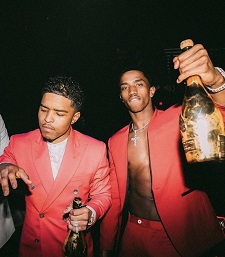 The rapper was joined by his father, older brothers Quincy and Justin, model girlfriend Breah Hicks, and a massive entourage for dinner.

At one point, Combs was shirtless as he cut into his oversized birthday cake in the restaurant’s garden, according to a source.

Combs showed off a bust down watch from Audemars Piguet that he treated himself to as guests sang “Happy Birthday,” and he spent the evening drinking straight out of bottles of Ciroc and Ace of Spades champagne.

“He was having the time of his goddamn life,” the source added.

After dinner, Combs made his way to Mokaï Lounge where Puff Daddy was waiting to celebrate.

He brought him an all-gold jet ski! It has Bluetooth speakers.

In music news, Christian also known as King Combs recently released his new EP, Cyncerely,C3. “On this record, I wanted to do something that I felt had never really been done before, and just choose a whole bunch of different sounds and put it all into one body of work because there are a lot of different sides to my artistry, so I wanted to show that in one,” Combs said in an interview with The Daily Front Row.

In that same interview, Combs also confirmed that he’s doing a collaboration with Sean John and bringing it back to its roots. “Yes, I want to bring back that loose fit, track suit, the velour poppy colors — pink was my favorite“