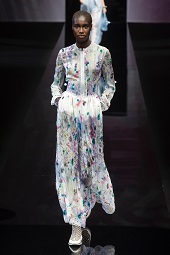 In the Japanese metropolis, the designer will host his first runway show on May 24th for a pre-collection parading the Giorgio Armani men’s and women’s resort 2020 lineups. The location for the show has yet to be disclosed.

The show will be held in conjunction with the celebrations, that same night, for the reopening of the Armani/Ginza Tower in the city’s tony shopping district.

“I am glad to be returning to Tokyo for the reopening of Ginza Tower after its refurbishment: a major project that underscores my bond with Japan, a country whose aesthetics and culture I have always admired,” Armani said.

First unveiled in 2007, the Armani/Ginza Tower — covering about 65,000 square feet over 12 floors and two basement levels — featured the Giorgio Armani, Emporio Armani and Casa collections, along with the brand’s then-first spa, an Italian restaurant and a Privé bar. The revamped location will open to the public on March 21.

European luxury goods company Christian Dior SE will cruise to the Kingdom of Morocco for their resort (cruise) 2020 show (see it here).

Chanel S.A., a French privately held company owned by Alain Wertheimer and Gérard Wertheimer, grandsons of Pierre Wertheimer announced that they will stage its 2020 cruise (resort) collection in Paris. The show will take place inside the The Grand Palais, a late 19th-century exhibition space in Paris on Friday, May 3rd, 2019 (see it here).

Prada and Louis Vuitton have also coincidentally timed their events to happen before and after the “Camp“-themed, Gucci-backed 2019 Met Gala — one of the biggest, most highly anticipated annual fashion events.