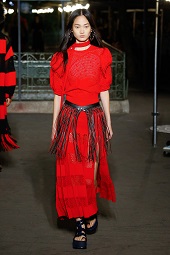 PARIS, FRANCE — Julie de Libran is out at Sonia Rykiel! She exited her role as creative director at the  French fashion house known for its striped knits looks.

The luxury brand is also seeking a for a new investor, according to WWD.

“The house confirms the departure of Julie de Libran,” a spokesman for Rykiel said on Thursday, adding that the label’s management was mulling over the organization of the design studio. “The house is not for sale. It is looking for a partner to enter its capital in order to increase its development,” the spokesman added.

De Libran, who joined Rykiel in 2014, showed her last collection for the label in a showroom presentation during Paris Fashion Week, having skipped the runway this season after a banner 50th anniversary year that culminated in an outdoor fashion show last September on the newly christened Allée Sonia Rykiel in Paris.

Her departure comes amid steadily declining revenues at the loss-making house, whose founder died in 2016. In recent years, it has been hit hard by the successive impact of the Russian financial crisis, the slowdown in consumer spending in Asia and the impact of terrorist attacks on tourism to Paris and the rest of Europe.

One source estimated that revenues at Sonia Rykiel are down to between 20 million euros and 30 million euros per year, versus roughly 80 million euros in 2012, when the founding family sold an 80 percent stake to Fung Brands, an investment company backed by Hong Kong billionaires Victor and William Fung.

Sonia Rykiel reported revenues of 83.7 million euros in 2011, with a net loss of 1.4 million euros, according to official company filings. At the time of the sale, it was one of the last independent fashion houses in Paris.

In 2016, the house shuttered its Sonia by Sonia Rykiel diffusion line and laid off a quarter of its staff as it moved the reposition the main Sonia Rykiel line with the introduction of lower price points.

At the time, its then-chief executive officer Eric Langon said the company had registered continuous losses since 2013 and the new strategy was designed to return it to profitability by 2019. Perry Oosting, who is also CEO of Clergerie, succeeded Langon last August.

One source said First Heritage Brands was looking to sell the brand and its four standalone stores, including its historic flagship on Boulevard Saint-Germain in Paris. The company employed around 250 people at the end of its 2016 restructuring and currently has a staff of around 200, the spokesman said.

Last year, she introduced the Pavé handbag, whose rectangular shape was inspired by the cobblestones that student protesters lobbed at riot police during the May ’68 protests, which coincided with the launch of the label.

That was followed by a Paris Couture Week show in which she riffed on Rykiel icons such as the peacoat; the ribbed sweater; tracksuit pants; the striped jersey, and the culotte skirt — all available to order by appointment at its Paris flagship.

In parallel, de Libran unveiled a capsule line of sweaters designed in collaboration with prominent women including Kirsten Dunst, Liya Kebede and Kristin Scott Thomas, with a portion of proceeds going to a charity of their choice.

The designer joined the brand from Louis Vuitton, where she was studio director of women’s ready-to-wear under then-artistic director Marc Jacobs. Prior to that, de Libran worked beside Miuccia Prada to help establish the Italian firm with celebrity and event dressing. Her résumé also includes stints at Versace, Jean-Charles de Castelbajac and Gianfranco Ferré.