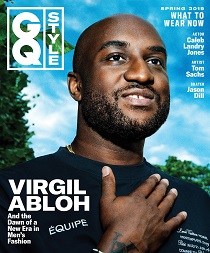 The cover features a picture of Abloh in Paris, at his first show as Louis Vuitton men’s artistic director on June 21, 2018, which was lensed by Pari Dukovic.

Below is an excerpt via GQ Style:

When Louis Vuitton announced the appointment of Virgil Abloh as the house’s artistic director of menswear, it was official: the industry’s ultimate gatecrasher had finally been officially accepted—and given the keys to one of the world’s preeminent luxury houses. At this point, everyone “knows” Abloh, and recognizes his signature on everything from graphic T-shirts to luxury trunks to water bottles and even Coachella DJ sets. And yet the man who has redefined the idea of the creative director—and made it perhaps the most coveted title on earth—remains as enigmatic as ever. So for Abloh’s first GQ Style cover story, we spoke with 39 of his friends, collaborators, and mentors—from childhood friends to A$AP Rocky to Rem Koolhaas—plus the designer himself, to make sense of his precipitous rise, and the cultural movement he has stoked along the way. As Thom Bettridge writes, “the story of Abloh’s ascent to the apex of one of fashion’s pre-eminent houses is also the story of the industry’s collisions with celebrity, streetwear, and social media.”