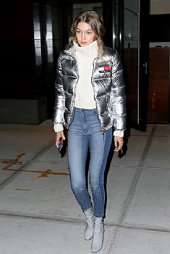 Rihanna, Hadid Sisters, Meghan Markle And Other Fashion Icons Show That Puffer Jackets Are Still In The puffer jacket is the ultimate insulation piece. It has proven time and time again that it’s here to stay, whether on a mountaineer trying to survive high altitudes or on fashionistas going for a night out in the cold weather. Justin Combs’ Kith x Moncler hooded down jacket is an excellent display of this fact.

But who says fashion can’t be practical? The truth is you can actually rock this piece all-year round. 21st century fashion icons Bella and Gigi Hadid are avid fans of the winter staple, but the supermodel sisters show that you don’t need snow to sport the jacket. In fact, Bella Hadid stepped out on a date with her beau, R&B star The Weeknd, wearing a navy down jacket from the Unravel Project over an unbuttoned Ellie Mae pajama top. It seems that the 22-year old was not too concerned about the cold weather. The two sisters have worn several variations of this particular piece before, with Gigi’s most memorable look in a white turtleneck underneath a Tommy Hilfiger metallic puffer jacket. One high profile person who did wear it for insulation was the Duchess of Sussex Meghan Markle who borrowed the Duke’s black down jacket while they were out on a stroll in New Zealand. Harper’s Bazaar stated that it was from Norrøna, a Scandinavian brand that specializes in outdoor gear. Even though she was already pregnant at the time, the coat was a still a little too big for the Duchess’ slim frame, which led many to believe that it is fact Prince Harry’s and not hers.

Looking back at the history of the puffer jacket, it originally made for practical reasons. American adventurer Eddie Bauer created the first known quilted piece with down feathers in order to protect himself from hypothermia. That was in 1936. Since then, leading fashion designers have created many variations. Who could forget Norma Kamali’s iconic Sleeping Bag coat? The thigh-length, buttonless, belted outerwear was—and still is—a covetable piece of New York’s fashionmongers. A close second is Alexander McQueen’s satin down-filled jacket with a rib-knit collar and cuffs.

Many people mistake puffer jackets for being bulky, heavy, and an all-around inconvenient piece of clothing, but this is not entirely true.

Stripped down to its essential material, down is the insulating layer found in birds. They work by creating air pockets, which allows the jacket to retain heat while also being lightweight. Over the years, puffer jackets have evolved and more features have been added. There are puffer jackets with removable hoods, giving you more flexibility in styling and functionality. Some can even fit in a small bag with no problem at all. A packable puffer jacket is showcased on Woman Within, and the added portability makes it perfect for traveling. It’s become so much easier to stow practical clothing in your bag and have it ready at a moment’s notice. But if you’re someone like Rihanna who doesn’t have to worry about carrying anything, you can be as lavish with the design as you like. One of her best looks was featured on Glamour, which showed the Fenty empress in an ultra-sized bubblegum pink coat. If you think that’s fluff heaven, wait until you touch the velvet fabric it’s made of.

Whether you have the ‘big coat energy’ that Rihanna has, or you’re more of the ‘if you can’t pack it, lose it’ type, puffer jackets are a fashion statement in their own right, and a practical investment.