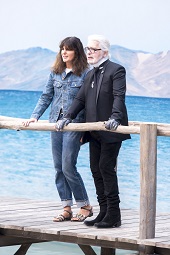 The German creative director, fashion designer, artist, photographer, and caricaturist is most known for his work as longtime creative director of both Chanel and Fendi, as well as his own namesake label. DM Fashion Book first speculated that he was ill after he missed the Chanel Spring 2019 Haute Couture show last January.

Fendi released a statement following the death of Lagerfeld, who worked at the house for more than 50 years (see it here).

The house of Chanel said that Karl Lagerfeld‘s longtime right-hand woman Virginie Viard would succeed him.

Though Chanel had steadfastly refused to address questions about Lagerfeld’s succession, the house had quietly paved the way for a handover by having Viard take a bow with Lagerfeld for the last few seasons, beginning with the cruise 2019 show last May.

In January, Viard appeared solo at the end of the house’s two haute couture shows, with the brand explaining that Lagerfeld was “tired.” With sales of $9.6 billion in 2017, Chanel is one of the world’s largest luxury brands.

“Virginie Viard, director of Chanel’s fashion creation studio and Karl Lagerfeld’s closest collaborator for more than 30 years, has been entrusted by [Chanel chief executive officer] Alain Wertheimer with the creative work for the collections, so that the legacy of Gabrielle Chanel and Karl Lagerfeld can live on,” the house said.

Lagerfeld boasted that his contract with Chanel was one page long, emblematic of his close ties to the owners of the privately held firm. Lagerfeld claimed to never schedule meetings with the Wertheimers, or even talk that much about business, although the brothers Alain and Gerard were often at his elbow in his studio at the Rue Cambon, or chatting with him backstage before a fashion show.

“We don’t talk to marketing people,” he said in 2009. “We do what our inner voices tell us. We’re kind of the Joan-of-Arcs of the fashion business.”

The house paid tribute to his talent.

“An extraordinary creative individual, Karl Lagerfeld reinvented the brand’s codes created by Gabrielle Chanel: the Chanel jacket and suit, the little black dress, the precious tweeds, the two-tone shoes, the quilted handbags, the pearls and costume jewelry. Regarding Gabrielle Chanel, he said, ‘My job is not to do what she did, but what she would have done. The good thing about Chanel is it is an idea you can adapt to many things,’” it said in a statement.

The announcement of Viard’s appointment lays to rest years of speculation over Lagerfeld’s legacy at the house, with Hedi Slimane and Phoebe Philo often cited as potential successors.