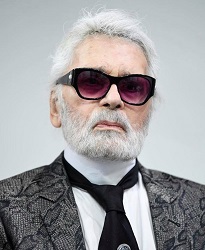 The German creative director, fashion designer, artist, photographer, and caricaturist is most known for his work as longtime creative director of both Chanel and Fendi, as well as his own namesake label. DM Fashion Book first speculated that he was ill after he missed the Chanel Spring 2019 Haute Couture show last January, but WWD says different.

According to the online fashion publication, “Lagerfeld worked tirelessly until the end, giving instructions to his teams for the Fendi fall ready-to-wear collection, due to take place in Milan on Thursday“.

He was most closely associated with the French fashion house, where he was couturier since 1983, engineering one of the modern fashion industry’s first and most successful brand rejuvenations and propelling the fabled French name from near obscurity to the summit of international luxury.

Lagerfeld was also the creative force behind the furs and ready-to-wear at Fendi for more than 50 years, of Chloé from the Sixties into the Nineties and of his signature fashion house, which encompassed everything from designer ready to wear to jeans and fragrance over the years.

Chanel said in a statement, “It is with deep sadness that the house of Chanel announces the passing of Karl Lagerfeld,” without providing additional details.

“A prolific creative mind with endless imagination, Karl Lagerfeld explored many artistic horizons, including photography and short films. The house of Chanel benefited from his talent for all the branding campaigns related to fashion since 1987. Finally, one cannot refer to Karl Lagerfeld without mentioning his innate sense of repartee and self-mockery,” it added.

The house said Virginie Viard, director of Chanel’s fashion creation studio and Lagerfeld’s closest collaborator for more than 30 years, has been entrusted by the group’s chief executive officer Alain Wertheimer with the creative work for the collections, “so that the legacy of Gabrielle Chanel and Karl Lagerfeld can live on.”

“Thanks to his creative genius, generosity and exceptional intuition, Karl Lagerfeld was ahead of his time, which widely contributed to the house of Chanel’s success throughout the world. Today, not only have I lost a friend, but we have all lost an extraordinary creative mind to whom I gave carte blanche in the early Eighties to reinvent the brand,” Wertheimer said.

Bruno Pavlovsky, president of fashion at Chanel, said: “Fashion show after fashion show, collection after collection, Karl Lagerfeld left his mark on the legend of Gabrielle Chanel and the history of the house of Chanel. He steadfastly promoted the talent and expertise of Chanel’s ateliers and Métiers d’Art, allowing this exceptional know-how to shine throughout the world. The greatest tribute we can pay today is to continue to follow the path he traced by – to quote Karl – ‘continuing to embrace the present and invent the future.’”

He was also an active and accomplished photographer, lensing ad campaigns for the Chanel, Fendi and Lagerfeld brands, plus outside clients, including Dom Perignon, Adidas, Coca-Cola and Pirelli. He did editorial shoots for scores of fashion magazines, including French, English and American Vogues, Harper’s Bazaar, Paris Match, V Magazine and Numero. Late in his career, he started making films to accompany certain fashion shows, and he directed commercials for clients, including ice-cream giant Magnum.

Lagerfeld has also been honored by the Council of Fashion Designers of America, Fashion Group International, the Gordon Parks Foundation and the Fashion Institute of Technology, to name but a few.

Lagerfeld moved to Paris in 1952 and attended the Lycée Montaigne and later, a drawing school. After he won the Wool Bureau prize, he apprenticed at Pierre Balmain, where he remained until 1958, when he became the chief designer at Jean Patou. In the early Sixties, bored by working for just one label, he launched a freelance career, with Fendi and Chloé among his most important early clients. Others included Mario Valentino, Max Mara, Tiziano, Repetto and Monoprix. He left Chloé when he joined Chanel, but returned for a five-year stint that wound up in 1997, when he was succeeded by the then-unknown Stella McCartney.

His role at Fendi expanded from furs to rtw, and this put him in the rare position of staging multiple fashion shows in multiple capitals. In 2006, he showed his signature label in New York, Fendi in Milan and Chanel in Paris.

When Chanel hired Lagerfeld in 1982, initially for couture only, it was more than a decade since the death of the founder, and the label had grown dusty. “When I started at Chanel, what people said to me was, ‘Don’t do it. It will not work; it’s an old name, it’s done,’” he recalled in a 2003 interview. “Nobody believed in it except me and [Chanel owner] Mr. [Alain] Wertheimer.”

Lagerfeld’s arrival at Chanel was hardly a roaring success, and his first couture collection garnered mixed, and even harsh, reviews.

But he would go on to reinvent Chanel and make it one of the most revered — and successful — fashion names worldwide. The privately held company released numbers for the first time last year, revealing that its business, including fashion and beauty, generated revenues of $9.6 billion in 2017.

Lagerfeld always made it clear Chanel was his primary job, and it eclipsed the other brands he designed by a large margin.

Fendi, though, grew to become a significant business when it passed from family ownership to those of Europe’s luxury groups. It was briefly, and tumultuously, jointly owned by Prada Group and LVMH, which swept in and bought a majority stake from the founding family in 1999. LVMH ultimately bought out Prada, and set out to bolster Fendi’s positioning by solidifying management, and building a palazzo in Rome that echoed Chanel’s Rue Cambon flagship, with a large and modern rtw and fur studio for Lagerfeld.

His main contribution at Fendi was in revolutionizing fur design from the get-go: taking a bold, anything-goes approach to an industry traditionally tied to using full pelts and creating heavy status coats. Lagerfeld treated fur as just another fabric to create rtw: shredding it, knitting it, cross-breeding it with other fabrics, and rendering it light, less precious and easy to wear. Among his innovations: fur fused with clear plastic, and embedded with 24-karat gold.

The designer, who showed Fendi on the runways of Milan and always took his bow with accessories designer Silvia Venturini Fendi, had his creative ups and downs at the Roman firm, creating collections based on a variety of periods and moods, from “Mad Max” tribal to “Mad Men” prim. Still, there were blockbuster Fendi moments, typically for the fall season, when he often went wild with colorful, intarsia furs.

Lagerfeld launched his signature fashion house in 1984, having signed a contract with Bidermann Industries USA the year prior. He parted ways with the American firm five years later and launched the KL by Karl Lagerfeld line with Germany’s Steilmann, as well as a higher-priced European line with Italy’s Corneliani.

Dunhill plc, part of the giant Vendôme luxury goods group owned by Compagnie Financiere Richemont, acquired the Karl Lagerfeld business in 1992 as part of the agreement for Lagerfeld to resume designing for Chloé. The acquisition price was estimated at south of $30 million.

His track record at Chloé was not always stellar, prompting then-CEO Mounir Moufarrige in 1997 to tap McCartney, then 25, to succeed Lagerfeld, saying he needed someone devoted to the brand full time.

The designer completed his divorce from Vendôme by buying back his company, his name and licensing rights for a symbolic franc. “There were too many things done without my control,” he told WWD at the time, blaming a rocky relationship with his collection licensee Selene SpA. “Now, it’s exciting, since I don’t have to do this for money, I can do this for fun.”

While Lagerfeld’s signature business never reached critical mass, its global cachet compelled the Tommy Hilfiger Co. to buy it for around $30 million. “I can make an Empire dress, but I can’t make an empire,” Lagerfeld joked to WWD in a joint interview with Hilfiger. “I’m not a businessman.”

In 2006, a new organization under the Tommy umbrella devised a new, less expensive contemporary women’s and men’s lifestyle collection, called Karl Lagerfeld and priced 50 percent below Lagerfeld Gallery, his designer collection. It was discontinued after its fall debut following a runway blowout during New York Fashion Week, and the Lagerfeld Gallery boutiques were also shuttered.

Also in 2006, the private equity firm Apax Partners acquired Hilfiger for $1.6 billion, and it became a private company. But the Lagerfeld company was not part of the package in March 2010 when the-then Phillips-Van Heusen acquired Hilfiger’s company for $3 billion in 2010. It was retained by Apax Partners, and subsequently attracted investment from G-III Apparel Group Ltd., his joint-venture partner in North America; PVH; Fred Gehring, vice chairman of PVH, and the family of Silas Chou.

In 2010, Lagerfeld stopped showing his signature collection on the Paris runway and revealed plans to permanently reposition his brand in the masstige zone, with an emphasis on online sales. Leveraging his likeness and his pet Choupette as brand mascots, the Karl brand found traction in the burgeoning affordable luxury segment, particularly with handbags and small leather goods. The brand now operates a network of stores concentrated in Europe and China, and sells online to almost 100 countries. It expanded into men’s wear, kids’ wear and watches.