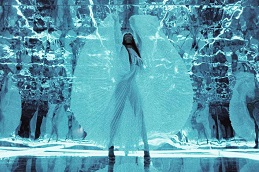 The high-end sports club unveiled a short film from Nick Knight’s SHOWstudio that features the British model and is intended to highlight the company’s “high-performance living.”

In the 3:24 film, Campbell is pictured in a bespoke mirrored box the size of an Equinox Hotels Studio room. The video is broken down into three separate segments. The first, Move, shows her stretching, boxing and jogging in place. That’s followed by Nutrition, which shows close-ups of her biting down on pieces of fruit. The final portion, Dream, is more surreal, showing her twirling in a long white outfit and a headband before she walks purposefully across a kaleidoscope-like screen, where she conceptually breaks through the glass in the room.

“When I think of Equinox the brand, and specifically the hotel, I think about pushing human experience and pushing boundaries, testing limits. Who better to represent this than Naomi Campbell?” said Knight. “I wanted Naomi to have something to push against. A virtual version of herself and all that makes Naomi, Naomi.”

“I’ve been a longtime admirer of Equinox and how they have set up their brand as a lifestyle with immense attention to detail,” Campbell said. “This is something I can certainly identify with and was proud to be a part of. Hotels are an obvious extension of this brand.”

The first Equinox Hotel will open at Hudson Yards in New York later this year and the company hopes to eventually open a national and international chain. Equinox is owned by the Related Cos.