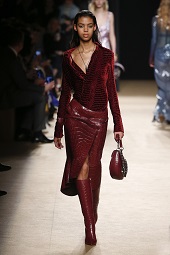 Roberto Cavalli Is Closer To A Sale, Philipp Plein Said To Be Eyeing Brand MILAN — Last summer 2018, DM Fashion Book reported that luxury Italian fashion house Roberto Cavalli was opened to new investors. The house’s owners are taking stock of the performance of the brand and are liking what they see, according to market sources. As a result, Italian private equity fund Clessidra SGR, which took control of the Florence-based brand in 2015, is said to be open to bringing in other investors to inject fresh capital and expand the fashion house (see it here).

In the most recent news, we could exclusively report that a Roberto Cavalli sale is approaching. And from the looks of it, Philipp Plein could be the new owner.

The deadline to submit offers for a minority or a majority stake in the Roberto Cavalli firm was set for Jan. 31. However, sources say the deadline is flexible and bound to be extended into the first few days of February.

A Milan-based source said a Cavalli board meeting is expected to be scheduled in 10 days to evaluate the offers. Designer Philipp Plein is rumored to be especially keen to take control of the brand and eyeing to overhaul it, leaving his own mark on the label.

In December, as reported, market sources contended that around 10 “interested parties” had made contact with Rothschild, the adviser tapped by Cavalli’s owner, Italian private equity fund Clessidra SGR, to find a buyer for a stake in the company.

Chief executive officer Gian Giacomo Ferraris has spearheaded the turnaround of Cavalli since his arrival in May 2016. Last month, presenting a new residential project in Bahrain, Ferraris said the company needs further investments to compete in the current scenario.

In May 2017, Paul Surridge was appointed the new creative director of the brand, succeeding Peter Dundas (see it here).

← Previous Story New Guards Group Is Reportedly Looking For Investors, LVMH Thrown In The Mixed
Next Story → Anya Hindmarch And Mayhoola For Investments Are Parting Ways