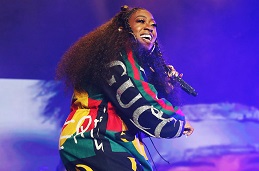 She Made HISTORY Once Again: Missy Elliott Becomes 1st Female Rapper To Be Inducted Into The Songwriters Hall Of Fame NEW YORK — Missy Elliott just made history by becoming the first female rapper to be inducted into the Songwriters Hall of Fame.

The multi-platinum selling artist was first nominated in November, and will become the first female Hip-Hop artist to be inducted. The other five songwriters include Dallas Austin, Yusuf Islam, John Prine, Tom T. Hall, and Jack Tempchin.

The Grammy winning emcee, whose career spans over 25 years, has penned hits including “The Rain (Supa Dupa Fly),” “Work It,” and “Get Ur Freak On,” and written for megastars like Whitney Houston, Beyoncé, Mary J. Blige, Ciara and Janet Jackson. Elliott is the third rapper to be inducted into the Songwriters Hall of Fame following Jermaine Dupri (2018) and JAY-Z (2017).

A humbly and grateful Missy took to Twitter to celebrate her nomination. “I want to CONGRATULATE all the AMAZING songwriters who have been inducted into the 2019 ‘Song Writers Hall of Fame‘ ?? also those who were nominated because their body of work is AMAZING?? I AM SO HUMBLY GRATEFUL to now be inducted also?? I ❤️you all? #SHOF2019 ✍?,” she tweeted.

For nearly 50 years, the Songwriters Hall of Fame has recognized the achievements of the people who put words and music together.

The six songwriters will be inducted at the Songwriters Hall of Fame’s 50th Annual Induction and Awards Dinner in New York on June 13.

Congrats Missy from DM Fashion Book. It’s well deserved. We’re so proud of your success. Continue to make history and be an inspiration to others.