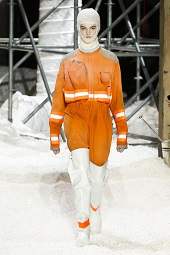 After less than two years, since he took the helm at the American fashion house, Calvin Klein Inc. and Raf Simons said Friday (December 21) that Simons is leaving his post as chief creative officer (see it here).

Simons‘s departure is not shocking, I saw it coming: In a December earnings call, PVH CEO Emanuel Chirico expressed dissatisfaction with Simons‘s performance, noting that a high-end overhaul of Calvin Klein Jeans had been unsuccessful and the Calvin Klein 205W39NYC line had not seen solid return on investments.

As a result of Simons‘s departure, Calvin Klein will not be showing on the February 2019 New York Fashion Week calendar.

In the latest Calvin Klein news, the brand is looking for a new creative lead, said a person with knowledge of the business.

Chief executive officer Steve Shiffman said in a separate statement on Thursday that the brand will close its 654 Madison Avenue flagship store, which Simons renovated in 2017, relaunch its ready-to-wear line and consolidate some teams in North America.

Shiffman said the brand will relaunch the 2015W39NYC ready-to-wear line under a different name and a new creative direction. He kept the details vague, stating that the business will be “designed to evolve the traditional luxury fashion model by connecting with a diverse range of communities, offering an unexpected mix of influences and moving at an accelerated pace.”

The source with knowledge of the business also said that several of Simons‘ longtime collaborators have exited the business, specifically Pieter Mulier, creative director, and Matthieu Blazy, the design director of women’s ready-to-wear. Michelle Kessler-Sanders, president of the 2015W39NYC business, will stay on in an executive position.

Shiffman‘s statement also announced the formation of a new consumer marketing division focused on consumer engagement and shopper experience. According to the source, this department is led by chief marketing officer Marie Gulin-Merle.

Calvin Klein in North America will see further changes: Shiffman said the brand will consolidate the men’s sportswear and the Jeans businesses, and also integrate the retail and e-commerce teams.

“Our industry is witnessing a historic transformation in consumer behavior which presents a significant growth opportunity as we look to grow the brand to $12 billion in global retail sales over the next few years,” said Shiffman.