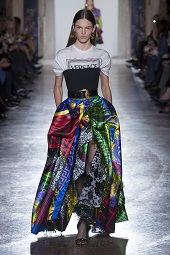 MILAN — The acquisition of Versace is complete and Michael Kors Holdings Ltd. has officially changed its name to Capri Holdings.

The fashion group, which includes luxury shoe and accessories brand Jimmy Choo, made news this past September when it announced that they were buying Versace for $2.1 billion, or 1.8 billion euro. Kors brought Jimmy Choo in 2017 for $1.2 billion (see it here).

“With the acquisition of Versace, we have now created one of the leading global fashion luxury groups in the world,” John Idol, chairman and chief executive officer of Kors, said in a statement Monday, and said the name Capri was inspired by the luxury island destination.

Shares of Kors opened up positive on, more than 1 percent, on Monday, the last day of trading in 2018. Still, the stock is down more than 40 percent over the last year.

The company anticipates that its newly expanded portfolio will help grow its revenue stream to $8 billion, while exposure in Asia intensifies. Versace alone is expected to generate about $2 billion in revenues, while the bulk of Capri’s revenues — about $5 billion — will come from the Kors brand. Capri sees significant potential to expand the Versace brand by opening more of its own stores and pumping up its accessories and footwear offerings, among other moves.

“Versace has long been recognized as one of the world’s leading fashion luxury houses, and is synonymous with Italian glamour and style,” Idol added. “We are thrilled that the house of Versace is now part of the Capri Holdings family of luxury brands.”

Donatella Versace will remain the chief creative officer of the Versace brand, while founder Michael Kors will be in charge of the Kors brand.