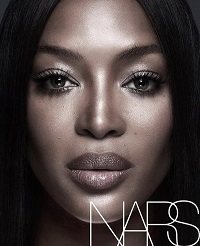 Beauty Campaign: Naomi Campbell Is The New Face Of Nars Despite being in the industry for over three decades, and the fact that she’s regarded as one of the most enduring and prolific supermodels of all time, Campbell has somehow never fronted a beauty campaign.

Campbell has been vocal about the fact that she’s been discriminated against as a woman of color — especially when it comes to beauty contracts — on multiple occasions. In May of 2017, for example, she told the Evening Standard, “I’ve never done [a beauty campaign] for anyone. People say, ‘Oh you’ve got beautiful skin’ and yet I’ve never done one.” The writer of the article went on to note, “She gives me a look that says, ‘You know why.'”

The campaign images, photographed by François Nars himself, include a close-up of Campbell as well as several black-and-white shots. Her skin is flawless.

The brand took to Instagram to share the news, including a quote from Nars (the person) in the caption:

“Naomi is a living icon and brings such strong personality to the camera,” he said. “She and I are like family. I have known her since the very beginning of her career. From the start, I have admired her, her beauty, and her style.”

Campbell also posted about the partnership on Instagram, writing: “Very excited to be the new face of Nars Cosmetics.”