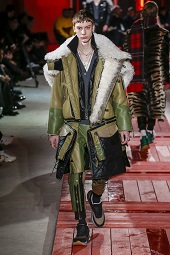 Alexander McQueen Will Not Show At Paris Men’s Week FRANCE — Alexander McQueen will not show at Paris Men’s Week in January.  The British luxury fashion house plans to switch to a series of intimate events as its new presentation format, according to WWD. The first will take place in London in May for the fall 2019 season. “Intrinsically connected to the bespoke tailoring heritage of Alexander McQueen men’s wear, these events will be central to the evolution of the house’s commitment to the championing of creativity, craftsmanship and innovation,” the brand said. The house moved to showing in Paris in June 2017 after having shown by appointment in Milan and London in previous seasons.

Struggling house Lanvin, which recently parted ways with its men’s creative director Lucas Ossendrijver (see it here), is also missing from the lineup, according to the Chambre Syndicale which released its provisional schedule for the week on Friday.

Maison Margiela will also sit out the Paris men’s shows this season as it undergoes a strategic review under chief executive officer Riccardo Bellini, who joined the company in March. The house is believed to be aligning its men’s ready-to-wear collection more closely with its women’s line and Artisanal couture collection. Maison Margiela creative director John Galliano oversees all three lines.

Y/Project will also be foregoing the schedule as this season’s guest act at Pitti Uomo in Florence earlier in the month.

But there will still be plenty of good shows still. Celine is in position as the closing act, with its first men’s show scheduled for of the week Jan. 20, mere months after creative director Hedi Slimane launched its men’s wear division during a coed show on Sept. 28.

J.W. Anderson, one of London’s most anticipated shows, figures among the additions to the week. Givenchy is also back on the men’s calendar, with an intimate presentation planned for Jan. 16 in the house’s couture salons on Avenue George V. Kris Van Assche during the week will also present his first main collection for Berluti.

New presentations in the week, set to run Jan. 15 to 20, will include Clot, Maison Kitsuné, Oneculture, System and Wendy Jim.