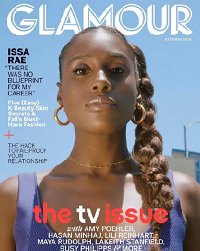 It’s the end of an era for Glamour magazine! The 80-year-old beauty glossy is ceasing print operations at the start of 2019. This announcement comes as  a surprise to no one because we’ve first heard these rumors back in the summer. Also, the magazine’s latest issue, a pamphlet size at barely more than 100 pages with roughly 40 pages of third-party ads, is a clear indicator that things in print are far from what they once were.

Glamour was a huge money-maker for Condé Nast for decades, frequently referred to internally as the publisher’s “cash cow.” Payments for placements and ads poured in from the beauty industry, making the magazine’s shift away from print all the more striking. Beauty brands have been some of the fastest to adapt and thrive in the Instagram age of advertising — none need the approval of a magazine editor when they can have an cadre of influencers posting praise of products.

When the last print issue of Glamour comes out in January, editor in chief Samantha Barry will be having her year anniversary in the role. In a memo to staff, Condé chief executive officer Bob Sauerberg made sure to position the end of print as part of Barry’s “vision” for Glamour and made sure to add, speaking on behalf of Condé: “We believe in [Barry’s] leadership and we are investing in the future of the brand.”

A Condé spokesman said the end of print will come with no further layoffs.

While Barry pushed the growth of Glamour’s web site as rising 12 percent year-over-year and the growth of video, a big investment area at Condé, rising 111 percent, different numbers tell a different story. According to the MPA-Association of Magazine Media, year-to-date numbers as of September show combined print and digital readers down 11 percent, web readership down 20 percent, mobile readership down 17 percent and video up 58 percent.

Glamour’s shift to online-only is a path that has become common for some of Condé’s B-list brands. Over the last decade or so, Condé has turned Self and Teen Vogue into online-only brands, along with Glamour in the U.K., which also has no regular print schedule but occasionally does a special issue. The publisher has also consolidated its U.S. and U.K. Condé Nast Traveller magazines, folded the web site of Epicurious into Bon Appétit and closed outright a slew of magazines, including Lucky, Men’s Vogue, Vogue Living, Vitals, Details, Jane, House & Garden and Mademoiselle, and roughly a dozen others. W magazine, already down to eight issues a year, is also up for sale, along with Brides and Golf Digest.