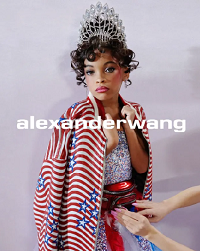 UNITED STATES  — Last July 2018, American brand Alexander Wang debuted a bold rebrand of his eponymous company with a runway show, a new logo and  an official move from the traditional delivery schedule to a more modern, hype-driven drop model — something that’s proven to be quite successful for his ongoing collaborations with adidas.

With all of these adjustments, Wang decided to dig into his personal history for Collection 1, particularly his experiences growing up as a first-generation Chinese American and viewing U.S. pop culture through an immigrant’s lens. The clothing incorporated stereotypical Americana in the form of bandanas, football jerseys, denim, Harley–Davidson-inspired leathers, flannels and patriotic stars and stripes. The personalities portrayed — bikers, cowboys, jocks, wealthy ladies of leisure — were mixed in with homages to his family roots, particularly bootleg-style “Chinatown” merch and Chinoiserie accents.

Drop 1 of Collection 1 will be hitting stores in the days ahead. To coincide with the release, the brand unveiled its first post-rebrand ad campaign, which is all about subversive Americana. In the ad, models Anna Ewers and Binx Walton star as high school cheerleaders and male models as football player. The campaign also features a pageant girl who pairs her crown and tight curls with a shiny fanny pack. The ad is a look into a much more modern version of American youth culture — something that Wang‘s been a genius at tapping into since day one.