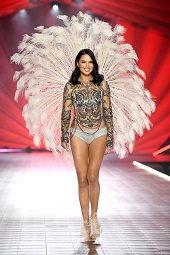 Farewell: After 18 Years, Adriana Lima Is Retiring From Victoria’s Secret UNITED STATES — All good things must come to an end. 37-year-old fashion model Adriana Lima has been an ambassador and muse for Victoria’s Secret since 2000, and the veteran Angel has only missed one show — in 2009, when she was pregnant — in 18 years. In 2012, she walked the show just five weeks after giving birth. While the brand’s crew of Angels is in constant flux, Lima‘s been a mainstay for nearly two decades, inspiring both her international fan base and the up-and-coming roster of newbies who have joined the Victoria’s Secret family each season.

According to new reports coming out of the Victoria’s Secret Fashion Show in New York, she’s hanging her wings up for good. The Daily Mail spoke to Georgia Fowler, narc, who let it slip that the 2018 event would be Lima‘s last. During the taping of the show at Pier 94, Lima had a whole segment of the runway spectacular dedicated to her, complete with a video montage of her walks from over the years and a solo victory lap down the catwalk. In case emotions weren’t running high enough, Victoria’s Secret made her a sign that read, “Thank you to the best Angel of all time.”

The Brazilian posted a bittersweet farewell message on her Instagram account shortly after the runway show began, essentially announcing her retirement from Victoria’s Secret. “Dear Victoria,” she wrote. “Thank you for showing me the world, sharing your secrets, and most importantly not just giving me wings but teaching me to fly.”