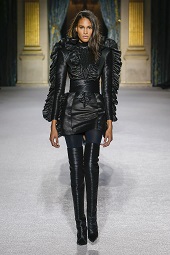 Balmain To Return To The Paris Couture Runways Rousteing is “looking to bring back the Parisian DNA,” he said.

The prospect has a lot of business potential considering 80 percent of Balmain’s sales stem from ready-to-wear.

Accessories, fragrance and cosmetics are also on his wish list.

The move will be a significant boost to the Paris couture season, as it marks the return of one of the most storied houses in French fashion history. Balmain last staged a couture back in 2002 when Oscar de la Renta was its couturier. A couture show takes any brand to a higher level of status.

The house’s return couture show will be timed to celebrate the opening of a new Balmain flagship on a famed Paris shopping artery, at 374 rue du Faubourg St Honoré.

Though the date is still to be confirmed, a spokesman for the house explained that the couture show will be staged inside the new flagship, a significantly large space encompassing 750 square meters.

“Olivier believes that this is a very logical progression, as couture is very much part of the DNA of the house Balmain,” said Txampi Diz, the house’s chief marketing officer.

“With the entry of so many young couture houses into couture, it only felt right that Balmain was present. Olivier considers that especially at a moment when everyone is doing streetwear, it’s vital to remind ourselves that luxury is about craftmanship, quality and clothes along with a certain level of savoir faire,” insisted Diz.

“In effect, many of our ready-to-wear looks were already really couture anyway. Olivier’s studio has become a true laboratory of new technique and fabrics,” added Diz.