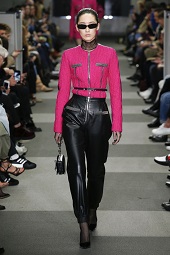 In June 2016, DM Fashion Book reported that designer Alexander Wang took on the roles of CEO and chairman while remaining creative director of his namesake label (see it here).

In October 2017, it was announced that Wang was stepping down from the role. He was succeeded by Lisa Gersh (see it here). The company has also appointed Stephanie Horton to the newly created position of chief strategy officer, joining Alexander Wang, Inc. from Farfetch.

In the latest news, it was just announced that after serving as chief executive for the brand for just a little over one year, Gersh is stepping down from the role, according to Business of Fashion. She was part of a group of appointments intended to take the business to the next stage, including Horton, as well as adding Tom Florio and Jonathan Miller to its board of directors. BoF reported that Wang has also appointed fashion industry veteran and former Tory Burch CEO Brigitte Kleine to its board.

For the time being, Wang, who founded the label in New York City in 2005, will resume serving as CEO with the support of senior management and the board while searching for Gersh‘s replacement.

A representative from Alexander Wang has sent Fashionisa the following statement from the designer:

We appreciate Lisa Gersh’s contributions to our brand and wish her well in her future endeavors. For the past two years, we have gone through an exciting transformation, including the success of our new runway cadence and go-to market strategy. Innovation and creativity remain core to the Alexander Wang brand, and looking ahead, we will continue to push boundaries and challenge the status quo.

The company has undergone plenty of changes over the course of the last year, including shifting his runway show at New York Fashion Week (see it here), switching up how products will be delivered to stores to follow a “drop” style model and Wang also just announced a collaboration with Uniqlo.