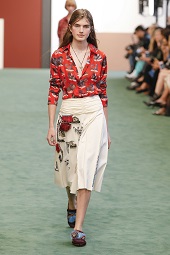 BEIJING — Parisian fashion label Carven is close to a sale to Chinese company Icicle Fashion Group, with a deal expected to emerge at the end of this  week, according to a source familiar with the matter.

In May 2016, DM Fashion Book reported that Hong Kong and China distributor the Bluebell Group acquired Paris-based brand Carven. During that time, the majority shareholder also announced some major changes in strategy, starting with suspending their men’s line and parting ways with its menswear artistic director Barnabé Hardy (see it here). His last collection was presented  in June 2016, in Paris.

In October 2016, we announced that Carven was planning to name a new artistic director to succeed Alexis Martial and Adrien Caillaudaud (see it here).

January 2017, it was announced that Carven appointed Serge Ruffieux as creative director succeeding Martial and Caillaudaud (see it here).

Carven is in financial trouble. This comes as no surprise because the brand had to cancel production for its Spring/Summer 2018 collection.

A spokesman said on Wednesday (May 23), that Carven has been placed into receivership and is looking for a buyer (see it here).

The French contemporary brand and its parent company, Société Béranger, have filed a voluntary petition with the Paris Commercial Court for the French equivalent of Chapter 11 bankruptcy protection, the spokesman said. This confirms a report in French financial newspaper Les Echos.

The ownership structure of the label, which sold a majority stake to Bluebell Groupin 2016, is unclear. At the time, Bluebell veteran Sophie de Rougemontwas appointed chief executive officer, succeeding Henri Sebaoun, head of Société Béranger, which purchased Carven in 2008.

The spokesman said the label is held by eight shareholders including Bluebell, Sebaoun and Turenne Capital, but he could not confirm if Bluebell still owns a majority stake. Italian media reported in March that Italian private equity fund Style Capital, which owns a minority stake in MSGM, was kicking the tires on Carven.

October 2018, we could confirm that Carven found a buyer! The French label could be taken over in the next few days by Chinese group Icicle. While the brand was on the verge of liquidation, it finally received eight total or partial takeover offers through the Paris Commercial Court, which will issue its decision on October 12. But Icicle was one of the candidates to lead the race as the new potential owner.

The proposal submitted by the Icicle is for a total takeover of the label, of the structure of Carven and its workforce, which was not the case for any of the other seven offers on the table. And, importantly, at a much higher price.

The 100-odd Carven employees should, then, if the trade court officialises the takeover on October 12, be included in the relaunch for the label founded in 1945 in Paris by Marie-Louise Carven.

Icicle has had a French subsidiary since 2013, with 28 employees, who attempted to raise the co-ed ready-to-wear brand’s visibility on the French market. It also operates as a design center, at which designers and artisans work on the ideas for the collections, for which they only make use of natural materials.

The other seven bids were from different players in the textile industry, such as Awara; Lee Cooper, which submitted a proposal at the last minute; Cashtex; Philippe Métivier; Market Maker and Red Luxury. They were only partial offers, showing only interest either in the name or a particular business segment.

The Icicle group has an annual revenue of 300 million euros and employs more than 2,000 employees in China, producing women’s, men’s, children’s and accessories ranges and distributing them via 250 stores. The Paris subsidiary is managed by Tao Xiao Ma.