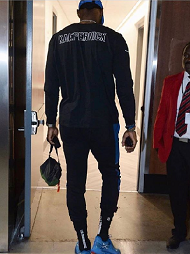 The NBA champion wore a shirt that supported Colin Kaepernick to a preseason game. James, like many times before, reassured the people of his support for Kaepernick and the ongoing Nike campaign.

“I wore a Kaepernick shirt tonight, because one, it’s Nike. And I’m a Nike guy,” James said, citing his lifetime endorsement deal with the company.

“Two, I support Kap. I’ve always supported Kap for what he stands for and believes in. Obviously, you guys saw the global spot Nike put out where he was the face of it. I was happy to be apart of it.”

It’s obviously that Nike’s biggest client has no issue with the Kaepernick ad campaign. James has always been supportive of Kaepernick, same with many other athletes, so wearing a shirt to show that support to a Lakers preseason game is almost something to be expected from James.

Nike Inc. featured Colin Kaepernick, the National Football League quarterback who kneel during the national-anthem to call attention to police brutality, racial injustices, social inequality and racism in America, in a new advertising campaign, a move that joins one of the NFL’s biggest business partners with a controversial star who is engaged in a high-profile legal battle with the league.

Kaepernick is a part of a renewed Nike “Just Do It” campaign, and his face will be featured in ads and on billboards.

A Nike spokeswoman wrote in an email to WSJ that Mr. Kaepernick is “among the athletes” being featured in the “Just Do It” campaign, which celebrates its 30th anniversary in 2018.

“This campaign is a compilation of the most inspirational athletes around sport—athletes who have chased crazy dreams, no matter the obstacle or outcome,” she added.

Kaepernick is currently engaged in a pitched battle with the league, alleging that he has effectively been blackballed, Nike is one of the league’s biggest partners, with a reported billion-dollar apparel deal as the official uniform maker. The campaign comes months after Nike reupped its partnership with the league.

He had been signed with Nike when he was an up-and-coming star with the 49ers, who he once led to back-to-back playoff appearances, including a Super Bowl. But following injuries and his absence from the league last season, he hadn’t been featured in Nike campaigns or had any prominent product lines.

Now Kaepernick has a new, multiyear deal with Nike, according to a person familiar with the negotiations, who said he will be a face of the “Just Do It” campaign. The person described it as a “top of the line” deal for football players.

“Nike’s team recognized that, even with links to the league, that they wanted to be socially conscious and authentic in the spirit of what ‘Just Do It’ meant,” the person said. “Colin was the ideal fit and nobody represents that quite like Mr. Kaepernick.”

The Nike spokeswoman said that the characterization of the company’s decision is “not accurate” and that “Nike has a long-standing relationship with the NFL and works extensively with the league on all campaigns that use current players. Colin isn’t currently employed by an NFL team and has no contractual obligation to the NFL.”

Kaepernick filed his grievance against the league last October. Last month, the arbitrator denied the NFL’s request for a summary judgment to dismiss the case.

Although filing for a summary judgment is often standard operating procedure, the ruling was a win for Kaepernick’s team because it effectively meant that the arbitrator saw sufficient evidence for Kaepernick’s grievance to raise a “genuine issue.”

Previously, The Wall Street Journal reported that, in depositions for Mr. Kaepernick’s grievance, NFL owners indicated that the President’s attacks on the player protests pushed them to change the rules.

After NFL owners changed the rules regarding the anthem in the spring to require players on the field to stand and “show respect” for the anthem, those rules were suspended after it drew the ire of players.

Negotiations between the NFL and player representatives continue.