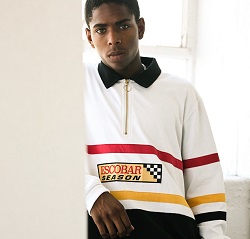 NEW YORK, UNITED STATES — Iconic Hip-Hop artist Nas released his HSTRY clothing line, in collaboration with Grungy Gentleman in 2013. The streetwear label is a reflection of Nas‘ own personal journey, with each piece drawing some inspiration from his past — the car he dreamed of buying as a kid, people who inspired him, or moments that stuck with him throughout his rise to legendary status (see it here).

Fashion designer Carl Williams launched his Karl Kani label in the 90s. Hip-Hop legends including Tupac, the Notorious B.I.G., Puff Daddy, Nas, and Pete Rock & C.L. Smooth all rocked the distinct rugby shirts and baggy jeans. Kani relaunched the line in 2016. Not much has changed, as some of those exact same designs now adorn stars like the Migos, Joey Bada$$, PNB Rock, YBN Nahmir, Teyana Taylor, YG, and A$AP Rocky.

Today, Nas is still rocking out with the brand he once modeled for in the  late 90s and early 2000s.

Together, Nas and Karl Kani teamed up for a capsule collection, dubbed Escobar Season by HSTRY x Karl Kani. Expect the collection to launch this fall 2018 on hstryclothing.com, karlkani.com and at Urban Outfitters. So far, the collection features a rugby, jersey sweatshirt, jacket, and possibly matching pants. However, this may only be the initial reveal, with more to be unveiled in the coming weeks.

The lookbook was captured by L.A. – based photographer Shannon Brown.