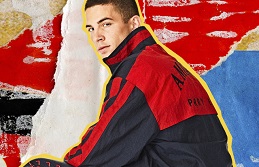 On Oct. 10, the flagship brand of Perry Ellis International Inc. will relaunch Perry Ellis America, a more Millennial-skewed subbrand that first debuted in 1984. The initial capsule will feature replicas of the original looks, complete with outsize logos, color blocking and baggy silhouettes that look just as relevant today as they did 34 years ago.

The initial drop will consist of 12 pieces that will be available in extremely limited quantities — 200 pieces only. Four other capsules will also be released after that, one each quarter.

The first capsule will be sold on Matches Fashion, followed by a global rollout with retail partners including Bloomingdale’s on 59th Street, Fred Segal and Selfridges. The collection will also be available at a new Perry Ellis America-dedicated e-commerce site.

Michael Maccari, Perry Ellis International’s creative director, said interestingly, the first collection was done in partnership with Levi’s and “was probably one of the first collaborations in the industry.”

Maccari said Perry Ellis America “was Perry’s answer to his personal need for true, weekend casualwear. Rooted in denim, it still had the true sportswear handwriting of his collection but was meant to tie back to jeans. As it evolved in the NIneties — when the streetwear trend became more bold and prevalent — the line transitioned into graphics, logos, color blocking, nylon, etc. At that time, logo-heavy tracksuits, anoraks, and sporty outerwear were staples of the line, and that was a departure for the brand.”

Maccari said that because the signature Perry Ellis line was more classic, it took some convincing from the designer and his team to have the company agree to produce such out-of-character looks. “There was never a logo present [in the regular line],” he said, “so it was very difficult.”

But produce it they did, and it was a hit.

“The tracksuit was the starting point,” Maccari said.

To replicate the line, Perry Ellis’s design team started collecting pieces from vintage shops and “trolled eBay” to find as many of the original pieces as possible, he said. And once the pieces were in-house, “we didn’t change anything,” he said. “We wanted to reissue them as they were.”

Maccari said the patch on the back of the jeans is “reminiscent of that time,” and the silhouette “sits higher on the waist and has a fuller leg. It’s like the original carrot fit.” There are double belt loops and comparatively smaller pockets.

The second capsule will feature a new bomber silhouette in wool with the brand’s signature eagle logo on the back. That same logo will be used on a cropped denim jacket while a rugby shirt will feature stripes on the sleeves. Tracksuits will feature multiple logos and will be offered in color blocking or a more subtle black-and-white model. A reissued sneaker will be part of the second collection as well.

“As we go forward,” Maccari said, “we’re going to shift the percentage more from reissue to reinvent.”

Melissa Worth, president of Perry Ellis, said: “The relaunch of Perry Ellis America dovetails nicely into the next stage in the rollout of our ‘Life Ready Since 1976’ brand positioning. We are reaching into our archives to bring the brand’s rich heritage to life, bringing the past to the present.”

She said the first two capsules will be higher priced than the regular line with T-shirts starting at $95 and topping out with a puffer coat for $395. “The idea is to create demand for the brand and then roll it out to our more-traditional business model,” Worth said. The third, fourth and fifth capsules will “still be more elevated,” but price points will be lowered.

“The goal is to create demand for the brand and leverage that into other tiers and markets,” Worth added. This includes offering the label internationally for the first time with distribution at Matches, Selfridges and others outside of the U.S.

With its bold logos and colors, Perry Ellis America is expected to appeal more to a Gen Z customer, which is why the company has partnered with Hypebeast for all five capsules, Worth said. Together, they will launch a new campaign titled “The New America,” that features a diverse group of young, stylish influencers including athlete and model Cordell Broadus, who is also the son of Snoop Dogg. It will also be sold on Hypebeast’s e-commerce site, HBX.

The launch campaign will be featured on Hypebeast.com as well as all Perry Ellis social and digital channels. And on Oct. 4 in New York, there will be an “experiential” Nineties-themed party to introduce the collection.