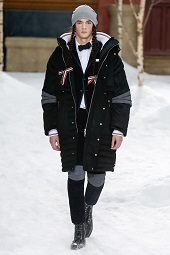 MILAN — It was just announced that Ermenegildo Zegna Group, the Italian fashion group known for its men’s suits will buy an 85 percent stake in New York – based menswear brand Thom Browne for a reported $500 million.

The agreement was reached with Sandbridge Capital and the namesake designer for an enterprise valuation of about a half of billion. Minority shareholder Stripe International is also no longer an investor. Browne, who founded the brand in 2001, will be the sole other shareholder, and will continue to hold the role of chief creative officer. The Thom Browne business will remain independently run. Rodrigo Bazan, who joined Thom Browne in May 2016 from Alexander Wang and has helped grow the label, will remain the company’s chief executive officer.

Gildo Zegna, CEO of the family-owned group, said the company has “always been open to opportunities for external growth. And, since we started looking at partnerships, I always knew that Thom Browne would be the perfect fit. In addition to the immediate benefits with regards to fabrics and manufacturing support we can leverage our global reach to further expand Thom Browne’s retail network. Most importantly, we share the same passion for excellence and impeccable, modern tailoring. Thom’s visionary approach and his unique point of view have enabled him to build and nurture the most loyal clientele. On this strong footing, and thanks to a thriving women’s business and strong appeal with Millennials, we believe that we can build long-term value for all of our stakeholders. Finally, I am very proud to oversee a rare major investment by an Italian luxury player in an American company. I have always been a strong admirer of the United States, and look forward to our strengthened presence there.”

Browne expressed his pride and excitement for this new partnership with Zegna. “I feel that their passion for only the best quality and craftsmanship is very much aligned with how I have always approached my collections … my conceptual approach to design and the long-term vision of growing a true luxury design-led collection for men and women is something we both feel strongly about as the future strength of Thom Browne … with Zegna, Thom Browne will have a partner who not only understands the fundamentals of this business, but truly embodies them and brings the knowledge and skills of a global leader.”

Browne also took the time to thank Sandbridge Capital and founding managing partner Ken Suslow in particular, for being “such a good partner, but more importantly, being such a good friend … I have always valued our friendship over the years of our partnership because he has always proven to be a true gentleman … We would have not achieved the outstanding growth of Thom Browne without his support.”

Suslow said that the transaction “ensures the continued long-term growth” of the company. “I am profoundly grateful for the successful partnership that Thom and I have developed over the years. Thom is a uniquely talented visionary – his enduring commitment to building a modern American luxury house dedicated to the finest craftsmanship and tailoring is truly inspiring,” said Suslow. “I believe that Zegna is the ideal partner for the Thom Browne brand. It is for this reason that we did not engage with other interested parties, and that instead Gildo, Thom and I agreed upon this deal in a privately negotiated manner.”

Sandbridge took control of Thom Browne in March 2016 from Japan’s Stripe International, formerly the Cross Company, which became involved with Browne’s business in 2009. Cross initially took a 20 percent stake in the company and upped it to a 67 percent controlling interest later that year.

The New York-based consumer and retail-focused Sandbridge was formed in 2012 with the involvement of a group of fashion industry heavyweights, including former Gucci Group CEO Domenico De Sole and Tommy Hilfiger. The private equity firm’s stable has over the years included stakes in Derek Lam, Tamara Mellon, Farfetch, Rossignol, Topshop and Karl Lagerfeld.

Zegna has been actively building its group. The Thom Browne news comes after Zegna in July acquired a minority stake in India’s luxury men’s wear firm Raghavendra Rathore Jodhpur, partnering with Reliance Brands Ltd. to enhance the label’s growth and brand potential with the goal to establish the company as one of Asia’s leading men’s wear players. Zegna also has a controlling stake in Bonotto SpA, a high-end textile manufacturer based in Molvena, near Vicenza, and bought Cappellificio Cervo, a historic men’s hat brand based in Biella. At the beginning of 2018, the Zegna Group further strengthened its creative offer and production capacity by finalizing the acquisition of a controlling stake in Pelle Tessuta, a company specialized in the weaving of leather.

Sources expect Thom Browne’s 2018 revenues to total between 140 million and 150 million euros. The company counts 30 stores globally and it plans to open 10 additional units next year, especially in Japan and Greater China. A store in Miami will open in October in the Design District. Europe accounts for 35 percent of total sales and the U.S. and Canada for 25 percent.