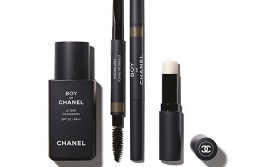 PARIS — Chanel S.A., a French privately held company owned by Alain Wertheimer and Gérard Wertheimer, grandsons of Pierre Wertheimer is expanding its brand into grooming. The House of Chanel is launching its first makeup line for guys, a three-product range, starting in South Korea on Sept. 1.

Chanel’s Boy division, which already counts products such as handbags and a perfume, is named after Boy Capel, the lover and muse of Gabrielle Chanel.

“Just as Gabrielle Chanel borrowed elements from the men’s wardrobe to dress women, Chanel draws inspiration from the women’s world to write the vocabulary of a new personal aesthetic for men,” the company said in a statement. “Lines, colors, attitudes, gestures….There is no absolutely feminine or masculine prerequisite: Style alone defines the person we wish to be.”

“By creating Boy de Chanel, its first makeup line for men, Chanel reaffirms the ever-changing codes of an unchanging vision: Beauty is not a matter of gender, it is a matter of style.”

The collection will be rolled out to the rest of the world in November on the house’s e-commerce platforms and in January 2019 in Chanel’s boutiques.

The two men who claim ownership of Chanel are far less  publicly-known.

Alain and Gérard Wertheimer, the billionaire brothers who have privately held Chanel for over 30 years, are two of the least famous owners in fashion. The Wertheimers have managed to largely shy from the public eye.

As the Times noted in 2002, the brothers “rarely, if ever, attend Chanel boutique openings or other Chanel events, they never lend their names to advertising, and they eschew licensing the company name for bedsheets and aerosols. ‘You can make money that way,’ Alain told Wine Spectator some years ago in one of his rare interviews. ‘But that’s not the way to run a family business.’”