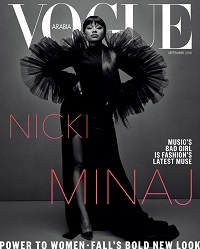 The female rapper and model covers the September 2018 issue of Vogue Arabia. This marks the multi-platinum recording artist Vogue debut. She been featured on the cover of a lot of publications, including international covers, but never been on Vogue until now.

The cover was shot in New York by renowned photographer Emma Summerton, while the styling was done by Anna Katsanis and overseen by Vogue Arabia fashion director Katie Trotter. The hair and makeup looks were created by Kim Kimble and Sheika Daley respectively.