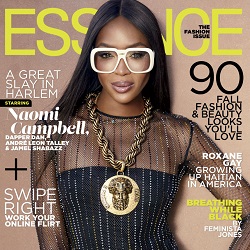 Next up is Naomi Campbell! The British supermodel fronts the September 2018 issue of Essence magazine.

For the shoot and cover story, the runway Queen teamed up with photographer Jamel Shabazz, Harlem couturier Dapper Dan and and former Vogue editor-at-large and fashion extraordinaire André Leon Talley to showcase Dap‘s collaboration with Gucci around the streets of Harlem.