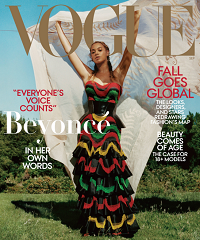 Next up is Beyoncé! The international superstar covers the September 2018 issue of Anna Wintour‘s Vogue magazine. This past July 2018, DM Fashion Book exclusively reported that the multi-platinum, Grammy Award winning popstar would grace the cover (see it here).

Photographer Tyler Mitchell photographed the shoot, the first African-American to photograph the magazine’s cover in its 125 year history. Styling was courtesy of Tonne Goodman.

In September 2015, the R&B/Pop singer made history by being the first solo BLACK woman to cover Anna Wintour‘s Vogue‘s September issue (see it here).

This marks the singer’s fourth Vogue cover: aside from the Sept 2015 issue, Bey covered the magazine in April 2009 and March 2013, Vogue’s Power issue (see it here).