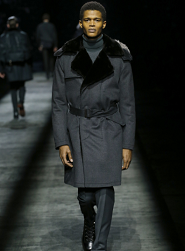 MILAN — In 2016, DM Fashion Book exclusively reported that creative director Justin O’Shea exited the Kering-owned brand Brioni, after taking helm at the house six months prior (see it here). He succeeded Brendan Mullane, who stepped down after 3 1/2 year.

In June 2017, Brioni, the Italian men’s wear brand, known for its C-suite client base and sky-high price tags announced a new creative director, Nina-Maria Nitsche, after eight months without a designer at the helm (see it here).

The latest news surrounding the house is that Brioni and its creative director Nina-Maria Nitsche have parted ways.

The men’s luxury company sent a brief statement on Friday announcing the exit of Nitsche, who presented her latest collection for the brand in June in Paris. A successor hasn’t been named yet.

A Maison Martin Margela veteran, Nitsche joined the French company in 1989 and, after Margiela’s resignation in 2009, took over the creative direction of the brand. She joined Vetements in September 2016 but left when the company relocated to Zurich from Paris in 2017.