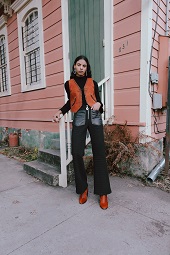 The brand was founded by Ali Hewson and her husband Bono in 2005.

“In light of a joint review of the business, Edun is restructuring its operations in preparation for its next chapter and LVMH will transfer its shares back to the founders,” the French conglomerate said in a brief statement.

In 2009, LVMH took a 49 percent stake in the label, and the following year featured the husband-and-wife team in an advertisement for Louis Vuitton as part of its “Core Values” ad campaign.

“The founders remain committed to Edun’s mission for sustainable fashion and thank LVMH for its support and dedication during this journey together,” the statement said. They have yet to decide on the future direction of the label, whose creative team was based in New York City.

Edun sought to promote trade in Africa by sourcing production throughout the continent. It worked with farmers in Uganda, for example, teaching skills to grow cotton, improving adult literacy and digging wells, among other initiatives.

But the brand has struggled to establish a strong fashion image, cycling through designers including Sharon Wauchob, who designed the label for six seasons, and Danielle Sherman, who left in 2016 after three years at the helm.

Julien Labat, who had previously worked at Jean Paul Gaultier and Carven, took over as chief executive officer in 2015.