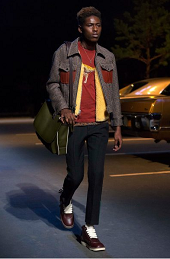 NEW YORK — In the summer of 2015, the inaugural New York Fashion Week: Men’s took place from July 13 to 16 at Skylight Clarkson Square in Manhattan (see it here).

Things are expected to change come 2019.

Starting next year, the Council of Fashion Designers of America will shift the dates for the spring men’s shows to the first week in June. The change will coincide with the New York women’s resort season, as well as allow American designers to show before their European counterparts.

London has historically kicked off the spring season with shows that start this year on Saturday. That’s followed by Pitti Uomo in Florence, Milan and Paris. For six seasons, NYFW: Men’s has brought up the rear with shows in mid-July.

But a successful mega, 10-day, dual-gender fashion week this past February has prompted the shift starting in 2019.

“The July timing is problematic for a lot of brands,” said Mark Beckham, vice president of marketing for the Council of Fashion Designers of America. “So this will be the last NYFW: Men’s in July.”

In February, he said, the men’s shows will once again be timed to run on the Monday, Tuesday and Wednesday before the women’s calendar starts on Thursday. “It worked really well,” he said. But the spring shows will now start before London.

“The designers are really excited about that,” Beckham said, citing Todd Snyder, Tim Coppens and Ovadia & Sons as among the proponents.

“It was too late to make the shift for this season,” he said, reiterating this year’s men’s dates will be July 9 to 11.

Snyder said he is in favor of moving the men’s shows to June next year. “With men’s fashion week, we were always showing at the tail end of the selling season,” he said. “But this is an opportunity for us, as American designers, to take the lead. That’s what they do in women’s, so it allows us to do the same thing.”

By opening the season, Snyder said, it affords American men’s designers the opportunity to have an “earlier influence with the buyers,” and “get more of the open-to-buy.” It also “creates energy around our direct-to-consumer business for the current season. Showing with women’s in September doesn’t make sense, but this works better.”

Not everyone agrees, however.

Joseph Abboud said because of his fabric and manufacturing limitations, “it’ll be virtually impossible for me to be ready with my spring collection in June. And I’m not sure the market mind-set is there for men’s then. We have to stop looking at self-aggrandizing moments. If we’re way off season, it won’t work.”

The February dates, however, are fine, he said.

Abboud has historically shown his fall collection in New York, but will be skipping showing the spring line in July this year. Fall is also a more important season for the brand.

Erin Hawker of Agentry PR, which produces and executes New York Men’s Day, which has opened NYFW: Men’s for the past few seasons, is taking a wait-and-see attitude.

“We will have discussions with all of our returning designers to ensure everyone is able to make a June deadline before London,” she said. “Obviously it makes sense to keep everything aligned.”

But for now, the focus is on the upcoming NYFW: Men’s shows. Beckham said close to 40 designers have signed on and the official calendar will be released on Monday.

The shows will be centralized in two locations: Industria Superstudio in Greenwich Village and Cadillac House in TriBeCa.

Those will be: Agent, Bristol, David Hart, Descendant of Thieves, HBNS, Krammer & Stoudt, Life in Perfect Disorder, Limitato, Taakk, This is Sweden, Sundae School and the Vanessa Zhang Fashion Incubator. Those shows will be held in two runs at Creative Drive at 55 Water Street.

Beckham said Rag & Bone will be holding appointments during the July time frame and a Fashion Future Graduate Showcase of top student designs from 50 colleges around the country will be showcased in the lower level of Industria during the men’s shows. That initiative is in concert with NYEDC, a New York City-based program to develop and fortify fashion in the city.

But missing from this season’s calendar are many of the biggest and most important names that had participated — albeit sporadically — in the past. These include Ralph Lauren, Calvin Klein, Tommy Hilfiger, Tom Ford and Thom Browne. In addition, Hugo Boss is not participating, Billy Reid will put his energies behind his Shindig in Alabama, and Raf Simons has decided to move his show for his signature brand to Paris this time.

The biggest name on the NYFW: Men’s schedule then will be Snyder, who will host a show at Industria that will seat 350 to 400 with standees. Snyder said he’ll be able to seat about the same number of people at Industria as he had in the past at Skylight, “plus or minus 50.”

But despite the shifts in dates and the ever-changing state of fashion shows, he’s committed to keep presenting. “We’re in an interesting time when it comes to the relevancy of fashion shows and where consumers get their information,” he said. “So we have to change as well. But we’re going to keep showing. It’s important for our brand, and a show gives us access to editors and influencers. Our business has doubled from last year and our store is posting positive comps, so we have great momentum, but we’re still building our brand.”

Beckham said CFDA will sponsor around 10 international editors and retailers to attend the shows next month and provide them with a stipend, transportation by Cadillac and a hotel stay.

For CFDA, many of its sponsors have returned and include Cadillac, Lifewater, The New York Times, WWD, Tumbler, Launch Metrics and Skylight Studios. Beckham said the group is still negotiating to finalize a hotel partner.