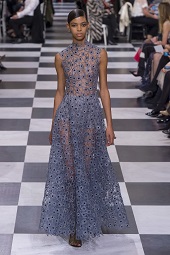 The appointment is the most recent in a series of changes made by Pietro Beccari since taking over as chief executive officer of Dior in February. This past March 2018, Dior confirms Kim Jones as Dior Homme’s new Artistic Director, succeeding Kris Van Assche (see it here). In April 2018, Christian Dior Couture hired Jens Riewenherm as chief digital officer.

Delapalme will take on his new role beginning June 15, becoming one of the most senior executives at the house, in charge of developing its omnichannel strategy and driving its network of stores by continuing to recruit and foster retail talents, the brand said.

He joins the French house from Fendi, where he was managing director of retail and wholesale during Beccari’s tenure. The two also worked together at Louis Vuitton prior to that.

Though he carries a different title, Delapalme takes over from Serge Brunschwig, who was named chairman and CEO of Fendi in February after holding the title of chairman and CEO of Dior Homme since September 2015. Beccari has since taken charge of the men’s activities at Dior.

Fendi is expected this week to appoint Giuseppe Oliveri, previously general manager of Dior China, to succeed Delapalme as managing director of retail and wholesale.

The executive joined Fendi in 2012 as director of development for retail and operations, and was promoted to managing director of retail and wholesale in 2016.

“I am delighted to be working once again with Charles, who has played a key role in the success of Fendi and who, throughout his career at the company, demonstrated his ability to effectively develop a network of stores and the e-commerce activity,” Beccari said.

“I am convinced that his extensive international experience in distribution and his managerial qualities will be a major asset in accelerating growth at Dior,” he added.

Today, Friday (May 25), Dior will show its cruise collection, designed by women’s artistic director Maria Grazia Chiuri, at the Great Stables of the Domaine de Chantilly near Paris.

Beccari has been charged with leading Dior into its next growth phase. Following LVMH’s acquisition of Christian Dior Couture for 6.5 billion euros last year, it became the second-largest brand in the group’s fashion division, behind Louis Vuitton and ahead of Fendi, reuniting its fashion and fragrance activities under a single umbrella.

Under the leadership of Sidney Toledano, Beccari’s predecessor, the brand went from revenues of 200 million euros in 1998 to more than two billion euros in 2017, excluding the beauty division.