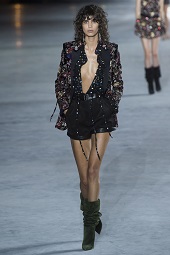 Saint Laurent To Stage Show In New York On June 6; Might Include Menswear PARIS — Luxury French house Saint Laurent will stage a show in New York on June 6 and it might include menswear.

Saint Laurent‘s creative director Anthony Vaccarello’s is eyeing the city that never sleeps for his next runway show.

The designer will present his next show for the house in NYC on June 6, according to sources familiar with the label’s plans via WWD.

Last January 2018, DM Fashion Book reported that Alexander Wang will shift his runway schedule to June and December, and the CFDA is looking to build momentum around it (see it here).

In tandem with Wang’s move, the Council of Fashion Designers of America has put into motion plans for official summer and winter fashion seasons taking place as soon as June and December 2018.

May and June is also resort season, with Miuccia Prada showing her cruise (resort) 2019 collection in New York. The collection will be presented on May 4 (see it here).

In addition, the CFDA Fashion Awards will be held in Brooklyn, New York at the Brooklyn Museum on June 4. Insecure‘s actress Issa Rae will serve as host (see it here).

Saint Laurent traditionally does not stage cruise shows, and early indications are that Vaccarello’s display will include men’s wear – though no word yet on whether it will be coed. Since arriving at the label in 2016 (see it here), the designer has shown women’s and men’s designs together as part of the traditional women’s wear calendar in Paris.