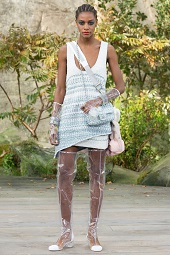 The group’s CEO, chairman and French business magnate Bernard Arnault, said “not so” at the company’s annual general meeting in Paris last Thursday (April 12). The luxury titan, flanked by members of the group’s executive committee onstage, was responding to a query during the meeting’s question and answer session.

When asked to comment on rumors that a senior LVMH executive had met with members of the Wertheimer family, which controls Chanel, to explore an acquisition, Arnault said: “Chanel is an outstanding business, but we are not in contact with them. I don’t know who told you that, but in my opinion, it’s fake news. There’s a lot of that around, you know.”

Alain and Gérard Wertheimer, the billionaire brothers who have privately held Chanel for over 30 years, are two of the least famous owners in fashion. Unlike Pinault and Arnault – regular front row fixtures at their brands’ seasonal runway shows – the Wertheimers have managed to largely shy from the public eye.

As the Times noted in 2002, the brothers “rarely, if ever, attend Chanel boutique openings or other Chanel events, they never lend their names to advertising, and they eschew licensing the company name for bedsheets and aerosols. ‘You can make money that way,’ Alain told Wine Spectator some years ago in one of his rare interviews. ‘But that’s not the way to run a family business.'”