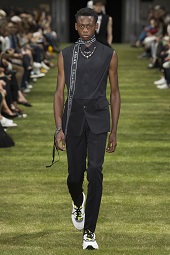 Pietro Beccari, who became chairman and chief executive officer at Christian Dior Couture six weeks ago said to WWD, “I am delighted to welcome Kim Jones, with whom I had the chance to collaborate previously at Louis Vuitton.” He added. “I admire his creative vision, which combines both his own inspirations of contemporary culture and his own reinterpretation of specific codes and heritage of a house. I am confident in his ability to recreate his universe within the maison Dior and imagine for Dior Homme an elegant and resolutely modern wardrobe.”

“I am deeply honored to join the house of Dior, a symbol of the ultimate elegance. I would like to warmly thank Bernard Arnault and Pietro Beccari for their trust in giving me this incredible opportunity,” Jones said in a statement. “I am committed to create a modern and innovative male silhouette built upon the unique legacy of the house.”

“Kim Jones is a cosmopolitan designer and art lover, born in London in 1979. He has a Menswear MA from London’s Central Saint Martins College of Art and Design. His graduation show won high praise within the press and the industry, and John Galliano bought part of it. In 2003, he was admitted to the London Fashion Week with his menswear label, showing a blend of street style and sport fashion.”

“While still working on his own label – which he terminated a few years later – Kim Jones was also ultra-busy on a series of collaborations with Umbro, Hugo Boss, Topman and Iceberg. He was honoured at the British Fashion Awards several times, and also worked for Alexander McQueen before being called up in 2008 by Dunhill, where he became creative director, until he joined Louis Vuitton in 2011.”