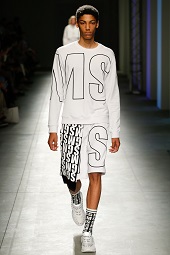 The remaining 19 percent will be controlled by Giorgetti, who will continue to lead the fashion house in the role of creative and artistic director of the brand.

Market sources say “Style Capital founder Roberta Benaglia will be appointed chief executive officer of MSGM, a role which was previously covered by Giorgetti himself. The value of the operation was not disclosed.”

“The entry of Style Capital into MSGM represents a decisive turning point in the growth of the company,” Giorgetti said. “I’m extremely pleased with this partnership. It not only means having available capital to invest, but also sharing future development plans with a partner that has always carefully preserved the continuity of its companies, enhanced their strengths and human capital, and added the skills necessary to promote their growth. From the beginning of our negotiations with Style Capital, I understood that not only their specific skills, but also their shared vision and their focus on human relations and the promotion of human resources will be fundamental for growing and guiding the MSGM team.”

“MSGM is a company with an excellent international distribution network, which in addition to Europe includes both Asia (China, South Korea and Japan), which is the main market of the brand, and America, which has good bases and great untapped potential. Having such a strong identity thanks to its recognizable style, the brand is also focusing on the world of Millennials, who seek contemporary luxury that includes product categories such as T-shirts, sweatshirts, denim and sneakers,” Benaglia said. “The MSGM product is 100 percent made in Italy: it is colorful and includes a few articles that are extravagant and fun, but never excessive, animated by the energy and engaging positivity of its 40-year-old creative director, who not only has innate talent but is the perfect age to understand the modern woman and also the needs of a younger audience.”

A further development of accessories, along with collaborations and partnerships within the art and music worlds, will be fundamental for the expansion of the brand, according to Benaglia.

MSGM closed 2017 with revenues of 50 million euros and an 18 percent gross operating margin. In 2018, the company expects to post revenues of 60 million euros. Italy and Asia, including China, South Korea and Japan, are expected to generate 26 and 35 percent of the company’s total sales, respectively, with Europe and the U.S. accounting the remaining 39 percent.

MSGM, which is available in 650 multibrand retailers, including the most prestigious luxury department stores, and operates 10 boutiques in international locations, such as Milan, Tokyo and Hong Kong, plans to open flagships in London and New York in the second semester of 2018. In addition, additional 30 MSGM boutiques will bow in the world within the next three years.