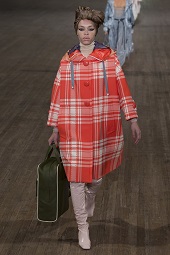 According to BoF, “LVMH confirmed Targon’s appointment but declined to share details regarding his specific title or role.” A spokesperson said,  “We are happy to welcome John to our design team.”

At the time of this post, DM Fashion Book is still unclear how Targon and Jacobs himself, who still designs the house’s ready-to-wear line will work together. However industry sources are speculating that Jacobs may soon step back from his namesake label.

We could confirm that there have been layoffs to the design team this week to make room for a team Targon will bring with him.

Targon‘s appointment indicates that lower-priced product is becoming an even bigger priority for the New York-based brand.

Targon co-founded the unisex line Baja East in 2013 with Scott Studenberg. Targon also made his way in sales, holding senior positions at Céline and Burberry.

As for the future of Baja East, its e-commerce site is still up and running, with in-season product available to purchase. Studenberg and Targon are said to be putting the finishing touches on their Autumn/Winter 2018 collection, although they will not be showing on the official Fashion Week calendar.