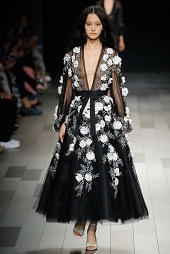 The high-end womenswear brand, co-owed by Georgina Chapman, who is the estranged wife of disgraced movie mogul Harvey Weinstein was scheduled to show her fashion brand Marchesa at New York Fashion Week on Feb. 14, but the show has been cancelled.

The news comes just months after Weinstein‘s downfall for alleged rape and sexual harassment. “Georgina couldn’t go through with it,” says an NYFW vet. “She was too scared.”

The show, scheduled for Valentine’s Day, was set to be produced by Navia Vision, a Brooklyn-based production company. “They were gung-ho . . . but as they got closer, she choked,” said the fashion week vet.

The NYFW vet went on to say that Chapman’s brother, Edward, who is CEO of the fashion company, “doesn’t really have the chops to navigate a boat that’s in that type of water.”

A spokesperson for Marchesa tells The Post, “Marchesa is looking forward to presenting their Fall ’18 collection in an updated format this season.”

The 41-year-old British mother of two, who announced her separation from Weinstein last October and who has reportedly filed for divorce, has otherwise largely disappeared from the spotlight, and questions are swirling over the future of a label given a jumpstart by Weinstein‘s connections and for dressing actresses for the Hollywood red carpet.