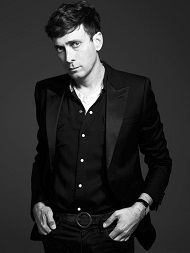 LVMH announces the appointment of Hedi Slimane as Artistic, Creative and Image Director of Céline. He is to start at the French house on February 1. He will direct all Céline collections, extending to men’s fashion, couture and fragrances.

Hedi Slimane’s talent and his remarkable ability to anticipate and express in a unique way the evolutions and desires of his age, will ensure a further era of exceptional growth and development for this famous Maison.

The group’s CEO, Bernard Arnault commented: “I am particularly happy that Hedi is back within the LVMH Group and taking the reins of our Céline Maison. He is one of the most talented designers of our time.  I have been a great admirer of his work since we collaborated on Dior Homme, which he launched to global critical acclaim in the 2000s. His arrival at Céline reinforces the great ambitions that LVMH has for this Maison. Hedi will oversee and develop all creativity for both women’s and men’s fashion, but also for leather goods, accessories and fragrances. He will leverage his global vision and unique aesthetic virtuosity in further building an iconic French Maison”.

Hedi Slimane said: “I am delighted to join Bernard Arnault in this all-embracing and fascinating mission for Céline. I greatly look forward to returning to the exciting world of fashion and the dynamism of the ateliers”.

Sidney Toledano added: “Hedi Slimane is an exceptional designer, complete artist and passionate about his work.  I am certain that he will bring his renowned creative energy and discipline to lead Céline to ever greater success”.

Last month, DM Fashion Book reported that Phoebe Philo is set to exit Céline after 10 years at the label and following months of rumors around her long-term plans. The Fall 2018 collection, to be presented in March during Paris Fashion Week, will be the last collection crafted by the designer (see it here).

Slimane will continue to be based in Los Angeles and lead creation there, while shuttling to Paris, where Céline is based. Its Rue Vivienne headquarters boasts extensive ateliers.

His first women’s and men’s collection for Céline will debut in September at Paris Fashion Week.