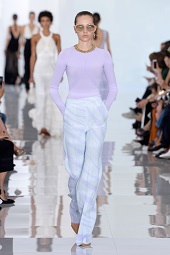 The brand’s creative director Paul Surridge made his womenswear debut on the runways in Milan in September 2017, and ever since, the menswear collection has been eagerly awaited.

The Florentine label, owned by Italian investment fund Clessidra will skip the January menswear week and to go for a co-ed cast of models for his show during the Milan women’s fashion week in February.

“This season marks the first step of the menswear relaunch, which is why he decided not to organise an entirely separate show, but a mixed show of the women’s collection accompanied by some 15 looks for men. A menswear pre-collection of 30 or so looks was already presented to buyers in November,” the label told FashionNetwork.com.

Before joining Roberto Cavalli in May 2017, Paul Surridge, who is known first and foremost for his status as a men’s fashion specialist and his minimalist style, served at the prestigious label Ermenegildo Zegna, heading its second line ‘Z Zegna‘ from 2011 to 2014.