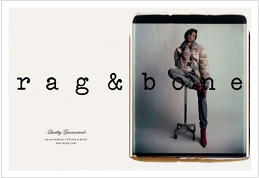 While there, she was responsible for the brand’s marketing, communications, e-commerce, store design and visual merchandising. She had been in the role since June 2015 and was charged with leading the brand’s marketing and digital transformations across all channels globally.

A spokesman for Rag & Bone confirmed her departure. “Johanna Murphy has decided to move on from Rag & Bone. We are incredibly grateful for all that she has brought to the brand and we wish her great success in her future endeavors,” he said.

According to WWD, Murphy couldn’t be reached for comment.

Prior to joining Rag & Bone, Murphy was chief marketing officer and digital director of Ivanka Trump, and before that was vice president of e-commerce at Kate Spade, where she was responsible for the sales, marketing and operations of the online and mobile businesses of Kate Spade New York, Kate Spade Saturday and Jack Spade. Earlier she held several leadership roles at GSI Commerce, including vice president of e-commerce, where she led the fashion and luxury practice, serving clients such as Burberry, Calvin Klein, Donna Karan, Betsey Johnson and Tumi. She has previously held managing director roles at both Razorfish and Scient.