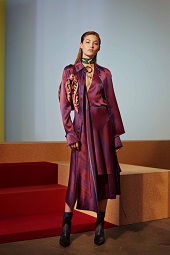 UNITED STATES — Belgian-American fashion designer, Diane von Fürstenberg, who is best known for her iconic wrap dress is selling an equality stake in her namesake label, which she founded in 1972.

The 70-year-old designer is looking for an investor willing to acquire a stake in the US -based fashion label and support it through a new expansion phase.

Fürstenberg said to WWD, “I’m not about to sell my business, but the time has come to give the company the senior management it deserves. I’ve decided we will probably sell a stake in [Diane von Fürstenberg‘s].” A spokesperson for the label confirmed the decision, telling FashionNetwork.com that “talks are still at an initial phase and, so far, no deal has been struck by the fashion label.” Also, no target date for the operation has been set.

It is reported that Fürstenberg asked the Michel Dyens & Co. merchant bank, with offices in New York and Paris, to handle the negotiations.

As the label’s spokesperson underlined, “Diane von Fürstenberg hasn’t had a CEO for over a year, and it’s now a matter of attracting a suitable top manager, to lead the company through a new phase and consolidate its heritage.”

The brand’s General Manager, Paolo Riva, left in November 2016, only a year and a half after being appointed to the post. Under Riva‘s direction, the label picked Scottish designer Jonathan Saudners as Creative Director in May 2016 (see it here).

Earlier this year, Marc Menesguen was appointed joint President alongside Diane von Fürstenberg. She also stated that Paula Sutter has been co-opted on the board of directors again. Sutter joined the label in 1999 as President, in order to reposition the brand commercially and develop its international reputation as a “luxury lifestyle brand“, before leaving the company in 2013.