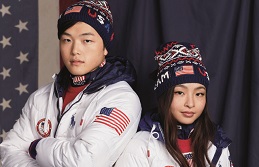 We’re just 99 days away from the Olympic Winter Games Pyeongchang 2018.

The uniforms worn for the closing ceremony parade are done in patriotic red, white and blue, and include a white water-repellent down jacket; navy double-fleece pants with red stripe detailing, and a vintage ski-inspired sweater in a bold red, white and blue block stripe. To accessorize, there are wool gloves with a winter-inspired intarsia pattern and a matching ski hat; a graphic bandanna featuring the American flag, and brown suede mountaineering boots with red laces.