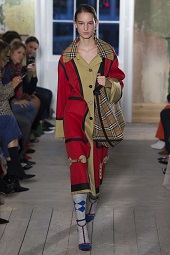 BREAKING: Christopher Bailey To Exit Burberry; Will Phoebe Philo Or Riccardo Tisci Be His Successor? LONDON — Christopher Bailey is set to exit Burberry after 17 years. The Chief Creative Officer will exit the brand at the end of 2018.

Before we get into the story, let’s take a trip down memory lane. Two years ago, DM Fashion Book reported that the British luxury fashion house consolidated Burberry‘s Prorsum, Brit and London brands into one single label, which is now called Burberry (see it here). In July 2016, we confirmed that Christoper Bailey was out as Burberry CEO. He became president and chief creative officer. Burberry has appointed Marco Gobbetti chief executive officer (see it here).

Today, we learned that Bailey is set to exit Burberry at the end of 2018, according to a release issued on Tuesday (October 31).

Bailey will keep his position as President and Chief Creative Officer until March 31, 2018 — enough time to see the March 2018 collection through to completion. At that time, Bailey will cede creative control and step down from the board, but will remain with the company and CEO Marco Gobbetti to “provide support” with the transition until December 31, 2018.

In his time with Burberry, Bailey has taken the label from a struggling British heritage brand to a fashion powerhouse. Gobbetti was the chairman and CEO of French luxury brand Céline, a position he has held since 2008, before joining Burberry. He worked in the fashion industry for more than 20 years, having previously worked at Givenchy and Moschino.

“IT HAS BEEN THE GREAT PRIVILEGE OF MY WORKING LIFE TO BE AT BURBERRY, WORKING ALONGSIDE AND LEARNING FROM SUCH AN EXTRAORDINARY GROUP OF PEOPLE OVER THE LAST 17 YEARS. BURBERRY ENCAPSULATES SO MUCH OF WHAT IS GREAT ABOUT BRITAIN. AS AN ORGANISATION, IT IS CREATIVE, INNOVATIVE AND OUTWARD LOOKING. IT CELEBRATES DIVERSITY AND CHALLENGES RECEIVED WISDOMS. IT IS OVER 160 YEARS OLD, BUT IT HAS A YOUNG SPIRIT. IT IS PART OF THE ESTABLISHMENT, BUT IT IS ALWAYS CHANGING, AND ALWAYS LEARNING. IT HAS BEEN A TRULY INSPIRING PLACE TO WORK AND THE DECISION TO LEAVE WAS NOT AN EASY ONE. I DO TRULY BELIEVE, HOWEVER, THAT BURBERRY’S BEST DAYS ARE STILL AHEAD OF HER AND THAT THE COMPANY WILL GO FROM STRENGTH TO STRENGTH WITH THE STRATEGY WE HAVE DEVELOPED AND THE EXCEPTIONAL TALENT WE HAVE IN PLACE LED BY MARCO. I WOULD LIKE TO THANK ALL MY COLLEAGUES AS WELL AS SIR JOHN PEACE AND THE BOARD FOR ALL THEIR SUPPORT AND FAITH IN ME OVER THE YEARS.  I AM EXCITED TO PURSUE NEW CREATIVE PROJECTS BUT REMAIN FULLY COMMITTED TO THE FUTURE SUCCESS OF THIS MAGNIFICENT BRAND AND TO ENSURING A SMOOTH TRANSITION.”

At the time of this post, there is no official word on who Bailey‘s successor will be, but we’ve heard some rumors and here are our five candidates who we think could take the helm at Burberry.