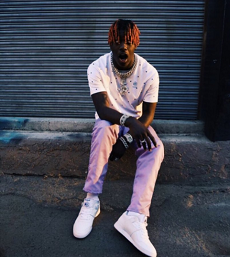 BOSTON —  Music artist Lil Yachty is the newest member of the Reebok family. This cool kid is a marketing genius!

The 20-year-old Atlanta – native could now add “footwear” to his forever growing resume. He just inked a partnership with the Boston-based footwear/sportswear giant. He joins the likes of Future, Teyana Taylor, Rae Sremmurd and Gucci Mane.

Announcing the news of his Reebok partnership via Instagram, Yachty posted the above photo of himself wearing a brand new pair of Reebok’s Workout sneaker. Writing in the photo’s caption, “New addition to Team @reebok ? Thank You Reebok, For This Opportunity. I’m More Than Appreciative.. #Family.“

As part of the new partnership, Yachty will appear in multiple global campaign ads supporting the Reebok Workout sneaker. He will also partake in all events surrounding the Reebok brand and its silhouettes.

With no plans of a footwear collaboration announced, time will tell whether or not Reebok and Yachty release a collaborative silhouette.

Stay tuned to DM Fashion Book for me details!