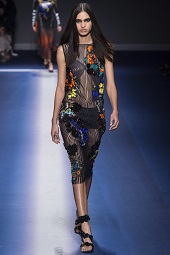 Louis Vuitton’s Kim Jones To Take The Helm Of Versace? MILAN — The fashion industry has been buzzing with rumors about who will take the helm at Italian luxury house Versace. Off-White‘s Virgil Abloh name has been added to the list, but it was fake news. We squashed that rumor when a spokesman for the Milan-based fashion house vehemently denied the reports. “This is categorically a lie. Nothing similar is happening,” (see it here).

Last February, DM Fashion Book confirmed that Riccardo Tisci has exited French house Givenchy, after 12 years at the helm (see it here). Back then, we also reported that Versace was in talks with Tisci. Versace made overtures to Tisci and held discussions in recent months (see it here). As to why isn’t Tisci officially at Versace yet? Well, he is said to be locked into an iron-clad non-compete agreement with Givenchy and its parent company, LVHM, which serves to bar him from working for a competitor for an unspecified period of time

In the most recent news, Versace may be about to reveal the name of its new creative director. It is now be reported that Louis Vuitton‘s Kim Jones is to take the helm of Versace, according to information that FashionNetwork.com received.

Currently, Kim Jones is in charge of men’s fashion at Louis Vuitton (he held that position since 2011). If he does indeed takeover Versace, this will be the first time that he’s working on women’s ready-to-wear.

According to Fashion Network, “Versace has not confirmed the information, calling it a ‘rumour‘. Yet, according to an internal source, Donatella Versace may well be ready to welcome and bring to the fore a new creative director, having herself been in charge of style for 20 years after the death of her brother Gianni, the Italian luxury label’s founder.”

“On the other hand, a certain nervousness is filtering through from Louis Vuitton’s menswear atelier. According to a source close to Kim Jones, the designer may well be willing to move to Milan, though he would first have to sever his contract with Louis Vuitton, which was renewed last year.”

“There’s no comment to make. This is just speculation. Kim Jones is under contract,” a Louis Vuitton spokesperson told FashionNetwork,” noting that rumours were also swirling around womenswear creative director Nicolas Ghesquière not so long ago, “and he is still here!”

“Kim Jones is a cosmopolitan designer and art lover, born in London in 1979. He has a Menswear MA from London’s Central Saint Martins College of Art and Design. His graduation show won high praise within the press and the industry, and John Galliano bought part of it. In 2003, he was admitted to the London Fashion Week with his menswear label, showing a blend of street style and sport fashion.”

“While still working on his own label – which he terminated a few years later – Kim Jones was also ultra-busy on a series of collaborations with Umbro, Hugo Boss, Topman and Iceberg. He was honoured at the British Fashion Awards several times, and also worked for Alexander McQueen before being called up in 2008 by Dunhill, where he became creative director, until he joined Louis Vuitton in 2011.”

The Versace family holds an 80% stake in the eponymous label; The Blackstone Group bought a 20 percent stake in Versace for $205 million in 2014.

Stay tuned to dmfashionbook.com as this story develops!