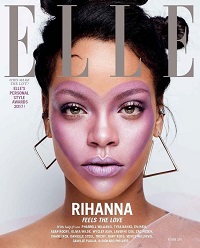 Breaking: Elle’s Editor-In-Chief Robbie Myers Is Out After 17 Years At The Helm Of The Fashion Magazine NEW YORK – In a shocking announcement, Elle magazine‘s Editor-In-Chief Robbie Myers is out!

After 17 years as the fashion magazine’s editor-in-chief, Myers is saying farewell.

Under the direction of Myers, Elle was Vogue‘s only true mainstream competition because of its sharp journalism and cutting-edge fashion photography. Below, read the heartfelt email Myers sent to her staff. It’s unclear who will succeed her, but we’re hearing that Hearst is eyeing Marie Claire’s creative director Nina Garcia, The Cut‘s Stella Bugbee and WSJ ‘s editor-in-chief Kristina O’Neill as candidates to take over Elle.

As life highlights go, 2000 was a banner year for me: In May, I was appointed EIC of ELLE, and just a few months later, in August, I gave birth to my first child, Frankie. She’s 17 now, with one year left before heading to college—and despite the promise of a pony and behind-the-plate seats for the Yankees’ next opening day, she’s told me she’s going to school outside of New York City. In other words, in a year, she’s ready to start her own journey, with my 15-year-old son Michael just two years behind that. And as much as I love going to Paris for the collections (I’ve been 50-plus times—and that’s just for work), I want to spend the next seasons as available to my children as I can be, and so I take my leave of ELLE now: a magazine, a website, a brand, and above all an idea of how a modern woman might move through the world with all of the passion and authority she deserves; an idea all of you have helped build into a powerhouse over these last 17 years.

When I started in this role, it was with the best mission an editor can give herself: To open women’s appetites. And I surrounded myself with the smartest, most creative people, you, to both magnify what ELLE stood for—strong, confident women who play a leading role in creating a culture that honors all of us—and expand the idea of what American beauty really looks like. We took fashion beyond the ateliers to the street (before street style was even a term) and made it personal, by spotlighting the chicest, coolest women on the planet, interpreted by such creative leaders as Samira Nasr, Ruba Abu-Nimah, David Bellemere, Terry Tsiolis, David Vanderwaal, Liz Collins, Alex Gonzalez, Joe Zee, and ELLE U.S. founder Gilles Bensimon, with whom I worked with for the first seven years of my tenure.

Every editor here embraces the idea that our reader is curious, erudite, and expects us to engage her on a higher level, with a multiplicity of voices and perspectives on our pages. And in that, Elle redefined what a fashion magazine can be, by assuming that a cultured woman could be simultaneously captivated by what Raf is doing at Calvin Klein, and, say, an (exclusive) interview with Justice Ruth Bader Ginsburg. Or the writing and reporting of such thinkers as regulars Daphne Merkin, Lauren Slater, Amanda Fortini, Salamishah Tillet, Lizzy Goodman, Holly Millea, Taiye Selasi, Rachel Kaadzi Ghansah, Jessica Pressler, Michael Eric Dyson, Akhil Sharma, John Richardson, Linda Tirado, as well as our own Laurie Abraham, Maggie Bullock, E. Jean Carroll, Lisa Chase, Rachael Combe, Emily Dougherty, April Long, Anne Slowey, and Louisa Kamps. In one of my favorite recent essays, novelist Chimamanda Ngozi Adichie pondered the bias against smart, empowered women who also happen to care about what they wear.

Why shouldn’t a smart woman love fashion? she wrote. And, for that matter, why shouldn’t a fashionable woman love politics, TV, comedy, art? I loved delving into each of those worlds, connecting with the women making an indelible mark on those fields, and thereby influencing how all of us think and feel. (It’s fitting that I leave as we close the 24th Annual Women in Hollywood issue with eight very different and compelling women on our covers, including someone I’ve long wanted to honor: 92-year-old actress Cicely Tyson, whom I’ve admired since I was a girl.)

There have been many firsts, where we jumped in while others demurred. Through Project Runway, ELLE helped to bring fashion to an enormous audience in the days before Instagram. We were the first into VR and AR—heck, we were the first to launch a website, back in 1999. We transformed our editorial features into celebrations of female power across so many industries with the aforementioned Women In events: Hollywood, Television, Tech, Art, Washington, Music. We’ve honored hundreds of women who are making a difference, and there will be a long list of up-and-comers to honor in the years to come.

And here’s one more thing I want you to be very proud of —because of our fantastic publisher Kevin O’Malley and his great team supporting us, ELLE editors have been able to create and publish more editorial pages than any of our competition for many years running, indeed, at or near the top of all monthly magazines (which made for some tough closes brilliantly managed by Terri Schlenger, Laura Sampedro and Ken Gawrych).

Of all of our accomplishments, that amazing content that you produce month after month is what inspires me the most. Some of you have been with me on this long journey since the beginning, or the beginning of your careers, and you all have grown into formidable editors: Laurie, Maggie, Emily, Joann Pailey, Jade Frampton, Jennifer Weisel, Rachel Baker and Seth Plattner among them. You are the best in the business, giving our readers the energy, excitement, and splendor they expect from ELLE. You did this. You made ELLE the success it is.

You will see me around the Tower from time to time, as I’ll be consulting with David Carey, bringing new ideas about where fashion, retail, and most importantly women, are heading in this transformational moment in history, and I’ll be speaking on behalf of those women, and Hearst, in the fall.

I wish you all the very best in your personal and professional lives, and I look forward to watching ELLE continue to lead the fashion and cultural conversation for modern, dynamic women everywhere. As I’ve always said, choose kindness. And please know that I feel great affection and respect for each of you, and above all, gratitude.

Related ItemsBreaking: Elle's Editor-In-Chief Robbie Myers Is Out After 17 Years At The Helm Of The Fashion Magazinedon bleekdonovanElle magazineRobbie Myer